For the annual event, the singing diva looks stunning in a body-hugging dress with billowing gold metallic sleeves and plunging neckline, while her husband opts for a black-and-white suit.

AceShowbiz - Rumors of Beyonce Knowles making an appearance at the 2020 Golden Globe Awards are true, though she didn't come on time. The singing diva and her husband, Jay-Z, made a surprise arrival at The Beverly Hills in California nearly an hour into the ceremony, and fans couldn't contain their excitement at all since it's been a while since she last made her appearance.

The couple arrived at the Sunday, January 5 ceremony when Kate McKinnon was introduced on stage to present Ellen DeGeneres with the Carol Burnett Award. They stood in the aisle during her introduction and took their seat when the TV host walked onstage. Not only the couple managed to sneak into the ceremony, but they also brought their own champagne. Onlookers said that Jay was seen pouring champagne for people at his table, including Portia de Rossi.

Someone else was also able to take a picture of the couple and the champagne. "They're waiting until Kate McKinnon finishes speaking to their seats. Is their bodyguard carrying bottles of alc for them?" so the user said in the caption, pointing out at the couple's bodyguard who was holding two bottles of Armand de Brignac Champagne in his hands. 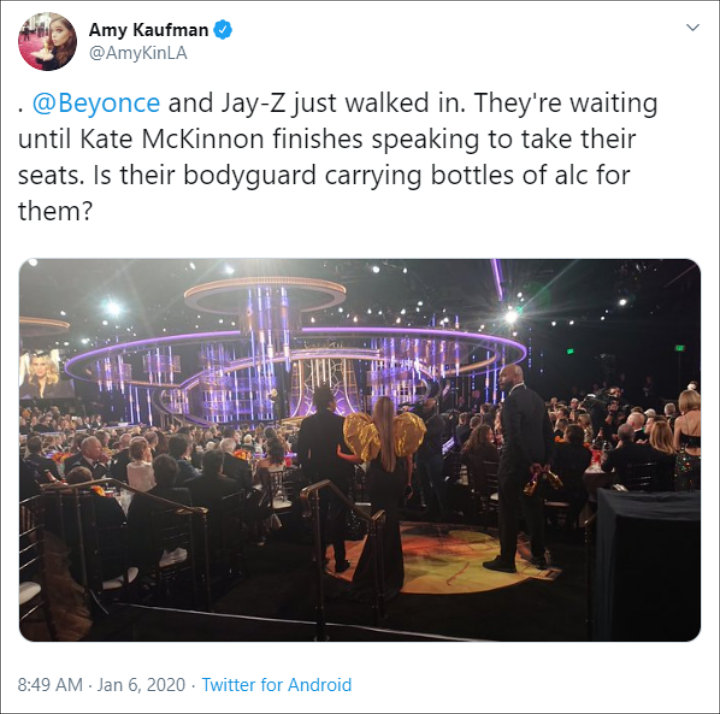 Someone managed to take a picture of Beyonce and Jay-Z at the 2020 Golden Globe Awards.

For the event itself, Bey dazzled in a body-hugging dress with billowing gold metallic sleeves and plunging neckline. Meanwhile, her rapper partner looked dapper in a black-and-white suit complete with a bow tie.

Soon after their surprise appearance was shown on the camera, Bey and Jay-Z became trending on social media. Someone called their appearance "the biggest blessing of 2020 so far," while another person said, "The way Beyonce is the main topic just for showing up."

Bey is nominated for best original song for her song "Spirit" that served as the soundtrack to "The Lion King" live-action adaptation. However, the accolade eventually went to Elton John and Bernie Taupin for the song "I'm Gonna Love Me Again". The song was featured in the British singer's biopic "Rocketman".

Faith Evans Claims to Be Duped Into Participating in Notorious B.I.G Documentary