The 'Anna Wintour' rapper reveals her plans to file a police report against Jesse Saint John, who co-wrote Lizzo's hit, after several other people came to her about their own issues with the songwriter.

AceShowbiz - Azealia Banks has accused a man who co-wrote Lizzo's Grammy-nominated hit single "Truth Hurts" of sexual assault. The female rapper took to her social media page to reveal her plans to file a police report against Jesse Saint John.

The 28-year-old star wrote in a now-deleted post that several people whom she knows personally and complete strangers have come up to her and opened up about issues they've had with the songwriter. Azealia didn't detail her own issue with Jesse, but she said she's currently gathering proof for a police report she plans to file.

"People with young children deserve the right to know who is in their neighborhood. This absolutely will end here," the "212" raptress wrote in the post. She added that she's already taken steps to have him on the California & New York State Sex Offenders Registry.

She also encouraged those who have evidence of the allegations to come forward. "If you have evidence you think is relevant to this, please private message me. I will not post you to my story and everything will be kept confidential," she wrote. "These are very serious crimes and I refuse to let this go until there is justice. I love you all. Please stay safe." 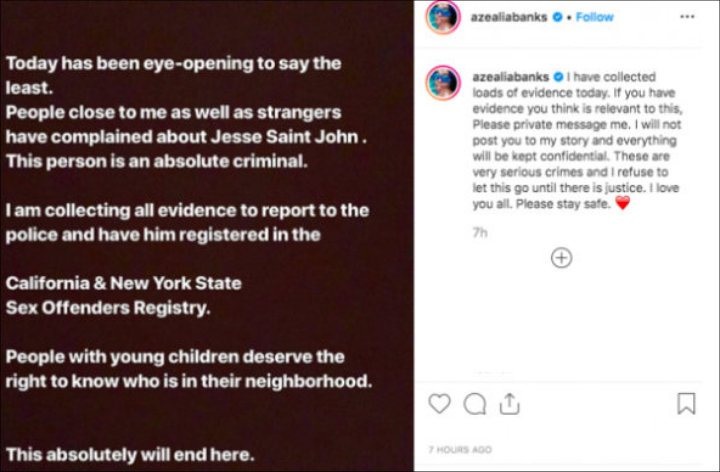 Jesse has not responded to the allegations. His Instagram account, however, has been set private. The 30-year-old, who is also a singer, has written for a number of artists, most notably Britney Spears, Kim Petras, Charli XCX, Brooke Candy and The Neighbourhood.

Back in April, Azealia came up with a rape allegation against an unnamed person on her Instagram Stories. She wrote, "lowkey just got raped. I feel like dirt." Detailing the incident, she added, "This rape s**t, you know. Men can just prey on you and just f**king badger you and force you to say 'yes' ... You feel like you gave consent, but you didn't give s**t. You never wanted to do s**t, but there you are, feeling f**king powerless. Somebody really got the f**king best of me, and I'm just so unsure how they got it."

She later deleted the troubling message though, and said that everything was "under control."