The 'Tupac Back' hitmaker and the founder of Milano Di Rouge clothing line have reportedly been seeing each other for six months and are now officially an item.

AceShowbiz - Meek Mill and his rumored girlfriend Milan Harris are reportedly "official" now after months of dating speculation. According to MTO News, the Philadelphia-born rapper has decided to settle down for the first time since splitting up from Nicki Minaj by moving on with the pretty entrepreneur.

A source allegedly close to the "Tupac Back" hitmaker says the 32-year-old star, whose real name is Robert Rihmeek Williams, and Milan, who goes by Milano Di Rouge on Instagram, have been seeing each other for six months and are now officially an item.

While neither Meek nor Milan has confirmed the romance rumors, his action speaks louder than words. He recently fueled the dating speculation after posting on Instagram Story a photo of Milan's shoes with flower petals. 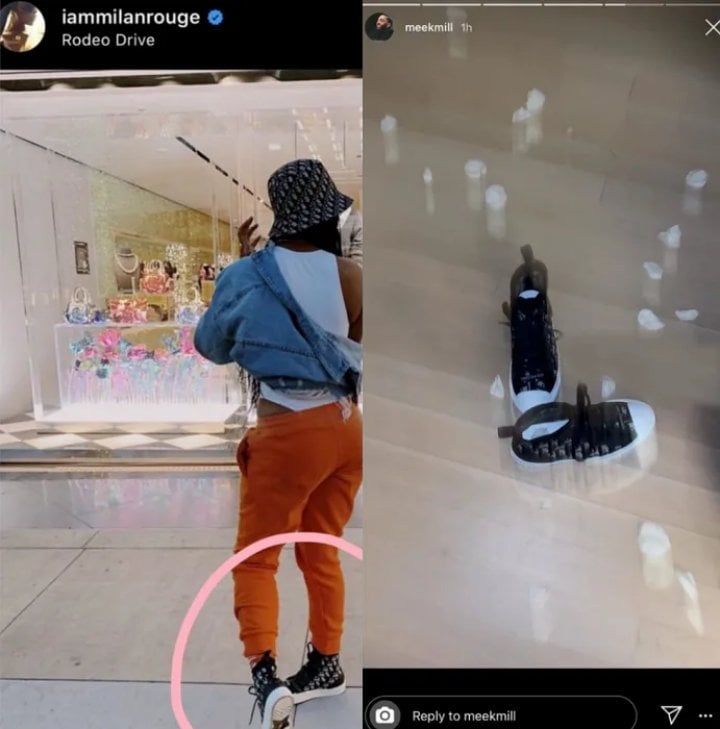 Milan previously denied that there's anything romantic going on between her and Meek. "To be honest, Meek was the first celebrity to ever wear my stuff. In 2012 he wore one of my hoodies. And it was an $80 hoodie at the time," she said on Boom 103.9 in late October about her relationship with the rapper, who has been modeling items from her Milano Di Rouge clothing line. "And that's literally when I started... people think I shouldn't have an $80 hoodie either. But he wore one of my hoodies."

The founder of a company for female entrepreneurs called Womainare Club also addressed pictures of them together on a private jet, "We're always on a private jet. It's so many people flying with us. It's so many people on them jets with us." When pressed if they're dating, Milan replied, "No. Meek supports Milano and I support Meek. That's my friend." Insisting that their relationship is purely platonic, she went on calling him "My homie."

Meek and Nicki Minaj were reported to have called it quits in January 2017 after a two-year relationship. He has never gone public with his new girlfriend, but has been rumored to be romantically linked to several women, including a woman named Janice who was featured on his Instagram picture earlier this year.

Watch: Caitlyn Jenner Looks Calm While Being Surrounded by 30K Cockroaches on 'I'm a Celebrity'