Many people begin accusing the model of being a catfish after seeing photos of her modeling for a fashion brand that leave people baffled because she looks really different from herself in her Instagram photos.

AceShowbiz - Sandra Lambeck has become the talk of the town among social media users after new photos of her modeling for a fashion brand hit the Internet. Many were baffled because the Instagram model looked so much different than herself in her Instagram photos that some of them began accusing her of being a catfish.

One person even took to Twitter to compare how Sandra looked in her Instagram photo and in the ads picture. The said person quipped in the caption, "Sandra Lambeck ON INSTA VS In REAL .." The post has garnered more than 600 tweets and 1,000 likes as of now. Another wrote on the micro-blogging site, "Unpopular opinion: Sandra Lambeck is infact a catfish and that's just the tea." 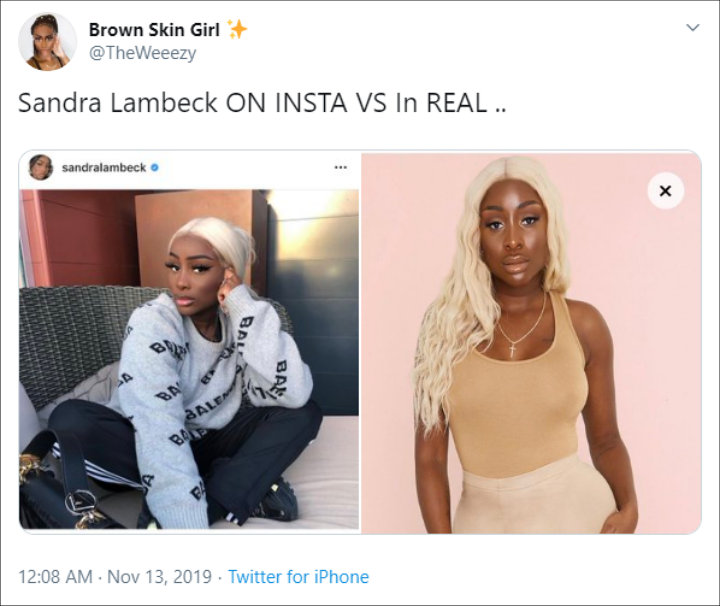 Sandra immediately defended herself following the criticism, insisting on Instagram Stories that she is not a catfish and even posted unedited photos of herself to prove it out. She later shared a lengthy statement on the photo-sharing site that read, "I've been really going through it these last couple of days and those pictures and what's been happening around that are the last straw!"

"I do know that my body shape might look a bit off as I've already publicly said that I wasn't happy with my bbl. That still doesn't mean that it's okay to make fun of me or how my body looks," she continued. "I've always been honest and transparent on here but I feel like most of y'all don't deserve my truth as you've used the fact that I've had a bbl to make fun of me."

Sandra went on expressing how "saddening" it was for her to see how many people "are happy about people being dragged on the Internet." She added, "Just because you don't see me showing emotions doesn't mean that I don't have any. How would you feel if you were in my situation," before concluding her post, "Don't do unto others what you don't want them to do to you. Be kind man, I've had it."

Many of her fans have also come to her defense following the controversy, including YouTuber Jackie Ana.