Tiger Woods' Ex Steps Out With Newborn Child for First Time - Get a Glimpse of the Baby's Face!

Elin Nordegren and boyfriend Jordan Cameron bring along their new bundle of joy when they attend her son Charlie's soccer game in North Palm Beach, Florida.

AceShowbiz - Tiger Woods' ex-wife Elin Nordegren's baby birth is as secretive as her pregnancy journey. It's unknown when the model gave birth to her child with boyfriend Jordan Cameron, but she confirmed the rumors over the weekend, when the couple brought along their new bundle of joy to her son Charlie's soccer game in North Palm Beach, Florida.

In one photo that surfaced online, Elin could be seen proudly watching the 12-year-old boy running around the field with her arms crossed, while the football player held on their tiny infant and mingled with other families attending the game. At one point, the Swedish native was seen sitting on a camping chair as Jordan continued holding the baby. 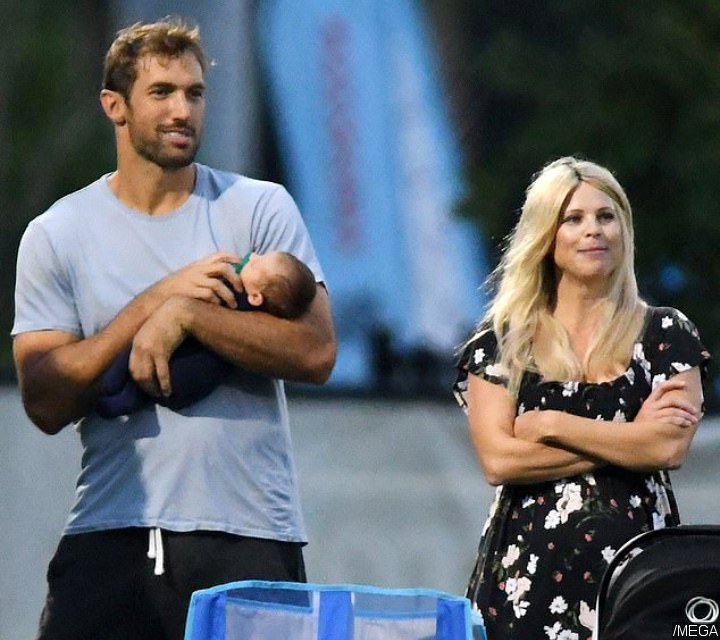 Elin Nordegren stepped out with Jordan Cameron and their newborn child.

"Jordan took the baby out of the stroller and started the baby for a long time... 20 minutes to a half hour he had the baby in his arms," an eyewitness told Radar Online. "He seemed like a doting father, very hands on, attentive and comfortable." The source added, "He rocked the baby back and forth. I don't feel the baby was fussing. He enjoyed it. He was smiling. He seemed like a happy and very proud father. He was showing the baby odd and left holding the baby."

On the other hand, Elin was reportedly more focused to the game as she "was cheering her son as he was playing." According to the onlooker, "You could see her clapping. She was more into watching the game. When her son came over, she said good job to him. Jordan did as well."

The eyewitness also added that a lot of people congratulated the couple on their newborn baby as saying, "People would come by and they would talk to Elin and they would look inside the stroller to look at the baby. A lot of parents would walk by and converse with them. There were lots of smiles between Elin and Jordan. A lot of nice exchanges."

The newborn child is Elin and Jordan's first child together. While the athlete also has a 10-year-old son from a previous relationship, Elin shares son Charlie and daughter Sam with Tiger.

Miley Cyrus on Backlash Over Gay Comments: 'I Was Talking S**t About Sucky Guys'