Before Cardi B's Head-to-Toe Outfit, These Celebrities Spark Controversies With Their Fashions

While their intentions were mostly to impress others, the likes of Nicki Minaj and Khloe Kardashian have in the past offended people with their inappropriate choice of outfits.

AceShowbiz - In this civilized era, clothes have been part of humans' basic needs. Some people, however, do not only pick their outfits out of necessity, but also to assert their identity. For celebrities who are put on constant spotlight, they often give extra care to their looks as their fashion could either add aesthetic to their appearance or earn them criticism.

Take Cardi B for an example. Known for her daring and bold ensembles, the "Bodak Yellow" hitmaker has landed on both sides of fans' feedback due to her outfits. Most recently, the Bronx femcee made headlines with her head-to-toe outfit when she made her debut at Paris Fashion Week. She raised eyebrows as she was completely covered up in the floral outfit created by designer Richard Quinn.

What she might not expect, though, was that her dress started talks about a major double standard in France. The country bans Muslim women from wearing face-covering niqabs or burkas, but Cardi didn't seem to have any trouble with officials despite breaking the law. Twitter users, including "Game of Thrones" alum Nathalie Emmanuel, were angered by this, as the French government and Cardi herself didn't respond to the controversy.

Cardi, however, is far from the first celebrity who landed in hot water for wearing wrong clothes at the wrong place. These stars below have in the past also come under fire for not knowing better about their inappropriate outfits. 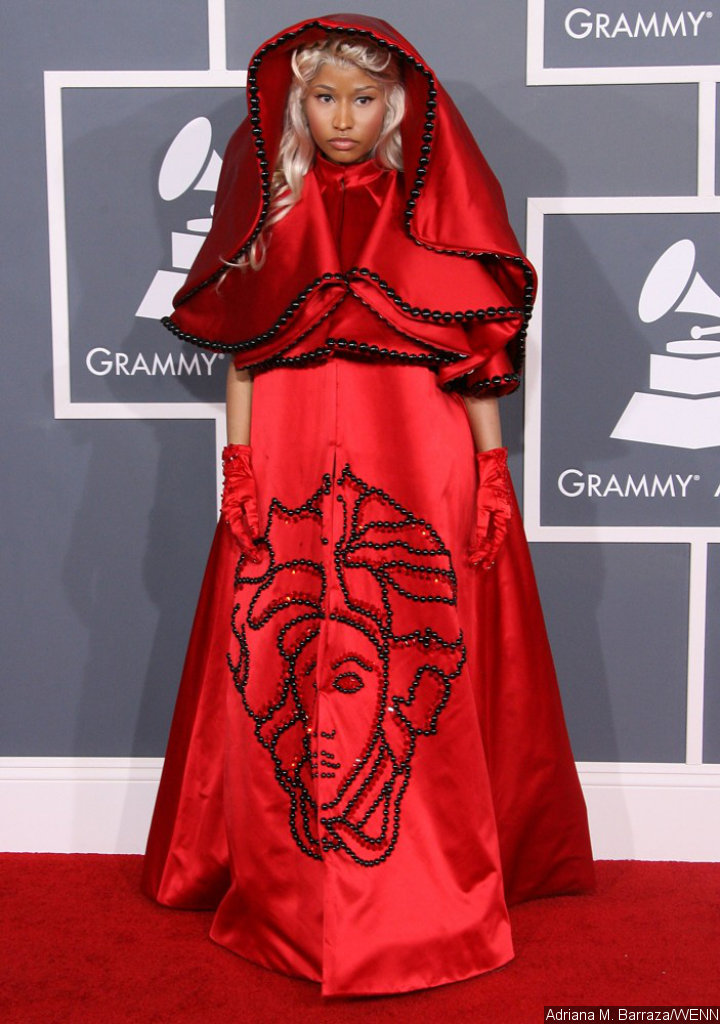 Nicki Minaj dressed as a nun at 2012 Grammys.

Nicki Minaj enraged Catholic community when she attended the 2012 Grammy Awards wearing a red Versace nun's habit. She was accompanied by an elder man who dressed as the Pope. She picked the look to match the theme of her performance at the same event, during which she staged a dramatization of an exorcism. The Catholic League condemned the rapper, calling her fashion and performance "tasteless and disrespectful to the Catholic Church." 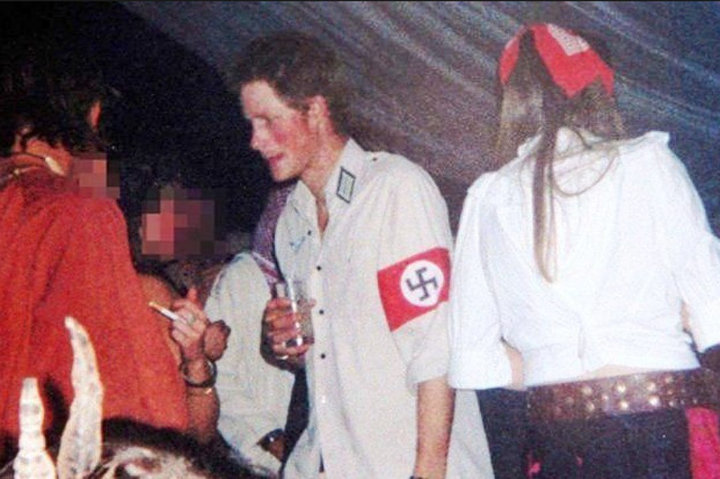 Prince Harry stirred a controversy with his Nazi uniform at a costume party in 2005.

Strict protocols have numerous times hindered British royal family members from unnecessary blunders, but what Prince Harry did outside his formal engagements seemed to be out of reach of these rules. In 2005, the red-haired prince shocked everyone when he wore a Nazi uniform complete with a swastika armband to a costume party. After receiving backlash from Jewish groups and lawmakers, the then-20-year-old royal apologized for his "poor choice of costume" and for causing "any offense or embarrassment to anyone." 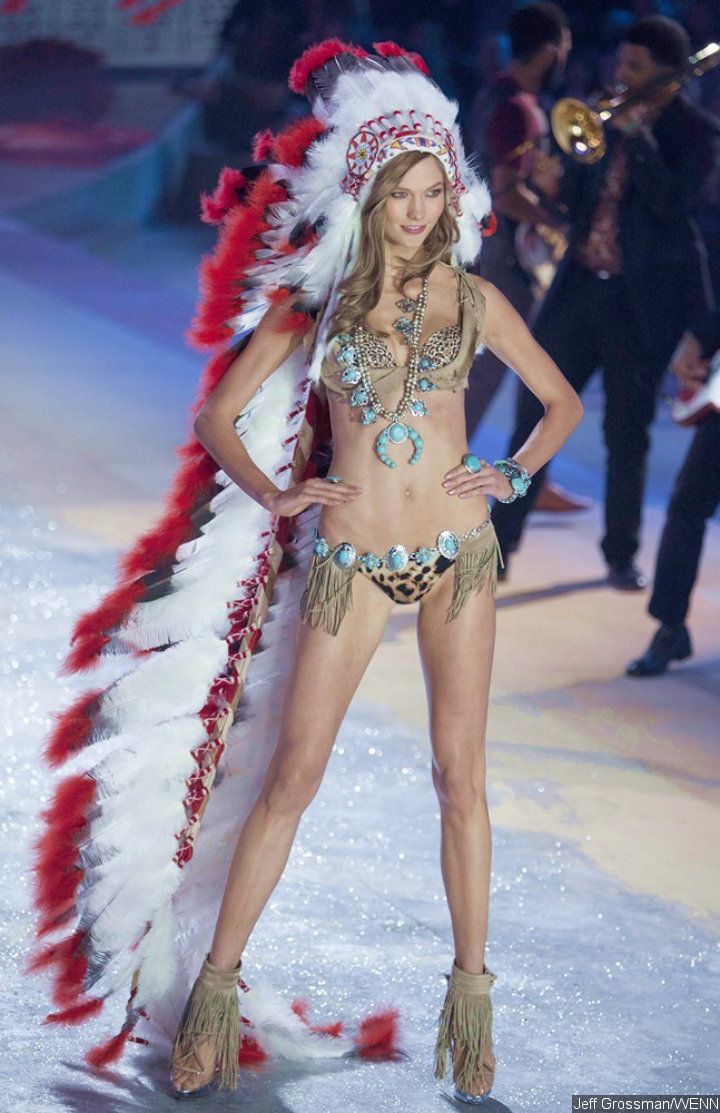 At Victoria's Secret Fashion Show, the models' lingerie was supposed to be the center of attention. But Karlie Kloss made headlines for the wrong reason as she rocked Native American-themed accessories, including a feather headdress and high-heeled moccasins, to complement her animal print bra and panties. VS and Kloss immediately apologized for the outfit, with the model tweeting, "I am deeply sorry if what I wore during the VS Show offended anyone. I support VS's decision to remove the outfit from the broadcast."

Katy Perry Dressing Up as Geisha at 2013 AMAs 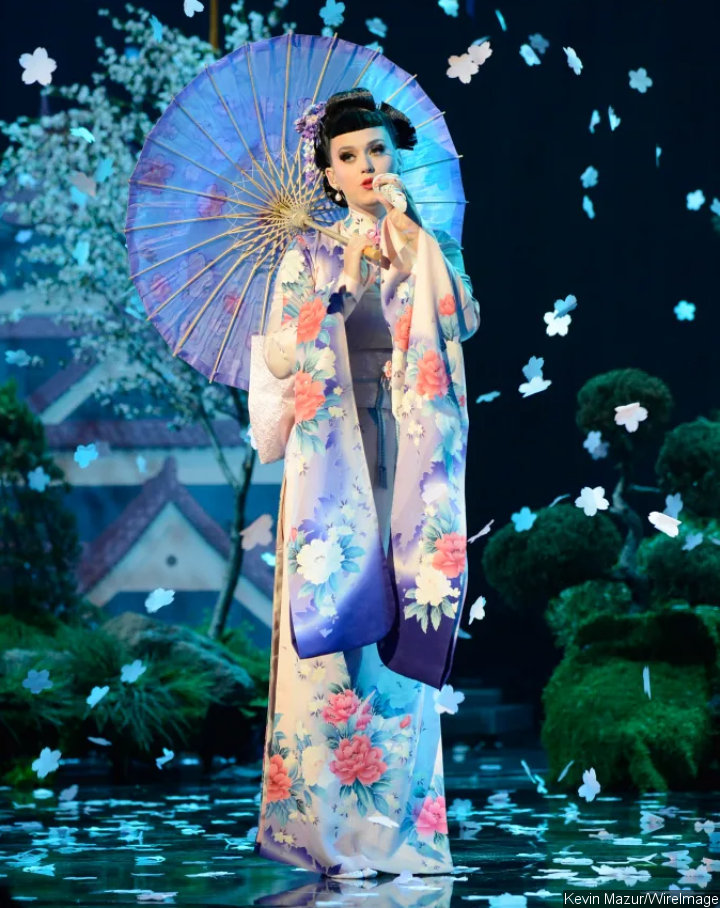 Katy Perry dressed up as a Geisha at the 2013 American Music Awards.

One of the singers who often put on elaborate display on stage, Katy Perry chose to adopt the Geisha culture when she sang "Unconditionally" at the 2013 American Music Awards. She wore a cleavage-baring kimono with white makeup and red lips. But it didn't sit well with many viewers, who accused her of appropriating Japanese culture and perpetuating harmful stereotypes of Asian women. In an interview after the performance, Katy acknowledged her mistake. "I didn't know that I did it wrong until I heard people saying that I did it wrong. It takes someone to say, out of compassion, out of love, 'Hey, this is what the origin is,' " said the "Roar" hitmaker. 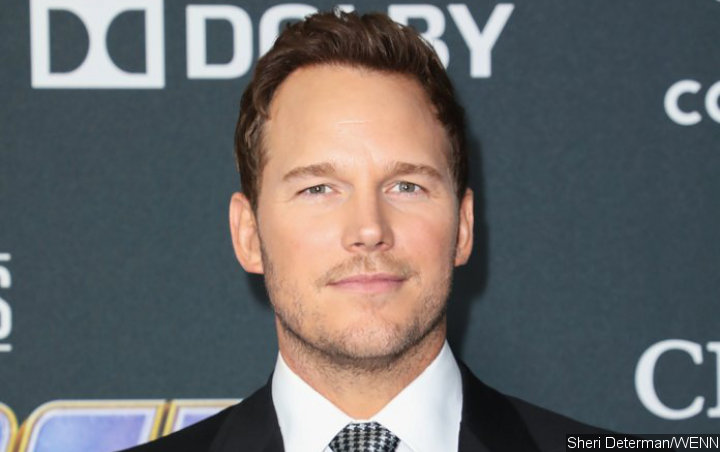 Chris Pratt once stirred controversy with his Gadsden flag T-shirt.

Chris Pratt is not the kind of person who seeks attention with his outfit, but he unintentionally sparked chatter on the Internet for wearing a T-shirt featuring an American flag superimposed with the Gadsden flag, including its slogan, "Don't Tread On Me," in July of this year. The symbol was originally used by pre-Revolutionary War colonists seeking independence from the British, but in recent years it has been adopted by far-right political groups, such as the Tea Party, and Second Amendment supporters. People suspected that the "Jurassic World" star was a white supremacist for wearing the controversial T-shirt. But the 40-year-old actor remained quiet as the Brain Treatment Foundation, a pro-veteran nonprofit, made it clear through its Facebook post that the T-shirt was to support the organization. 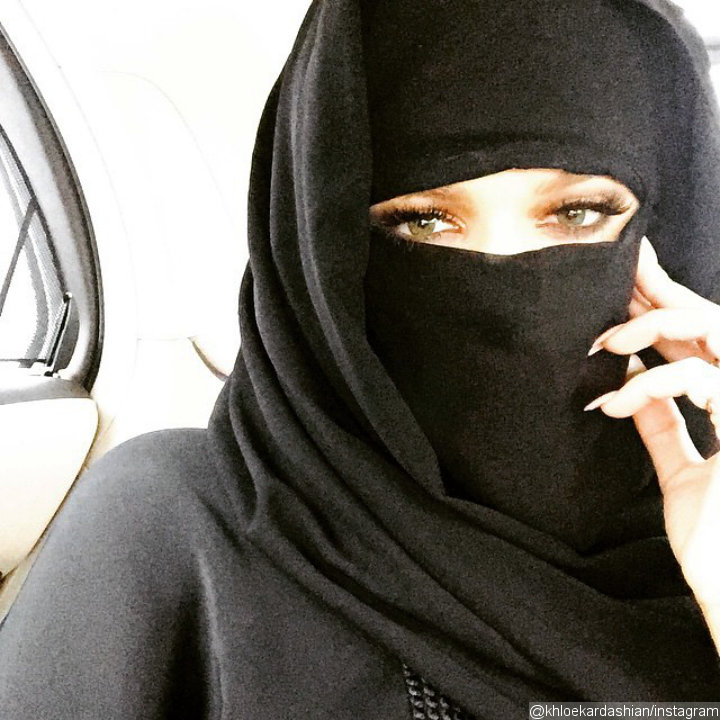 Khloe Kardashian posted a selfie showing her wearing a niqab during a 2015 Dubai trip.

During her trip to Dubai in May 2015, Khloe Kardashian posted on Instagram a photo of her wearing a niqab, the traditional Muslim headdress that reveals only the eyes. The TV personality might just want to show how well she adapted to a different culture, but not everyone appreciated it. Twitter users, particularly Muslim women, were offended by the Good American Jeans founder, accusing her of cultural appropriation. Despite the backlash she received over her outfit, the "Keeping Up with the Kardashians" star didn't seem to be fazed as she neither released a statement to address it nor deleted the photo from her social media account. 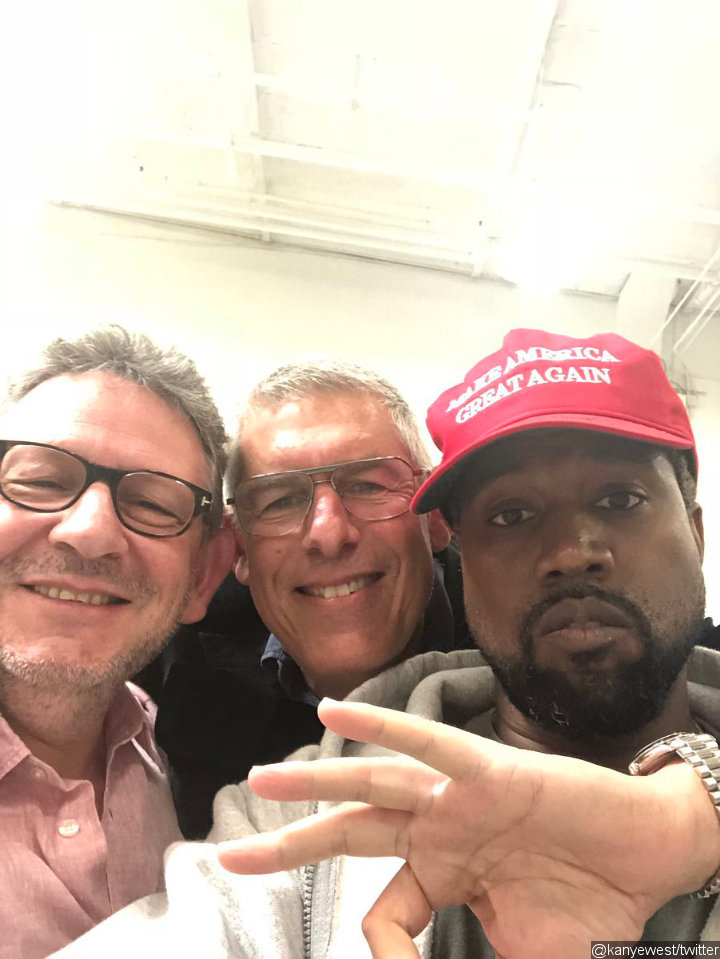 Kanye West wore a 'Make America Great Again' hat at a gathering to preview his album in 2018.

Kanye West had been at the center on controversy for various reasons before, but this incident might have cost him some of his fans. The "FourFiveSeconds" rapper shocked his Democrat-supporter fans when he wore a "Make America Great Again" hat, which represented his support for Donald Trump, to a gathering to preview his album in September 2018. As if it's not confusing enough, he paired it with a Colin Kaepernick sweatshirt. The football player was criticized by the president for kneeling while the national anthem played before a game. People expressed their disappointment at the Yeezy designer, with a number of them swearing off listening to his music again. Not bothered by the negative reactions, Kanye admitted in the next month that he liked Trump's "male energy" and wearing his "MAGA" hat made him feel like Superman. 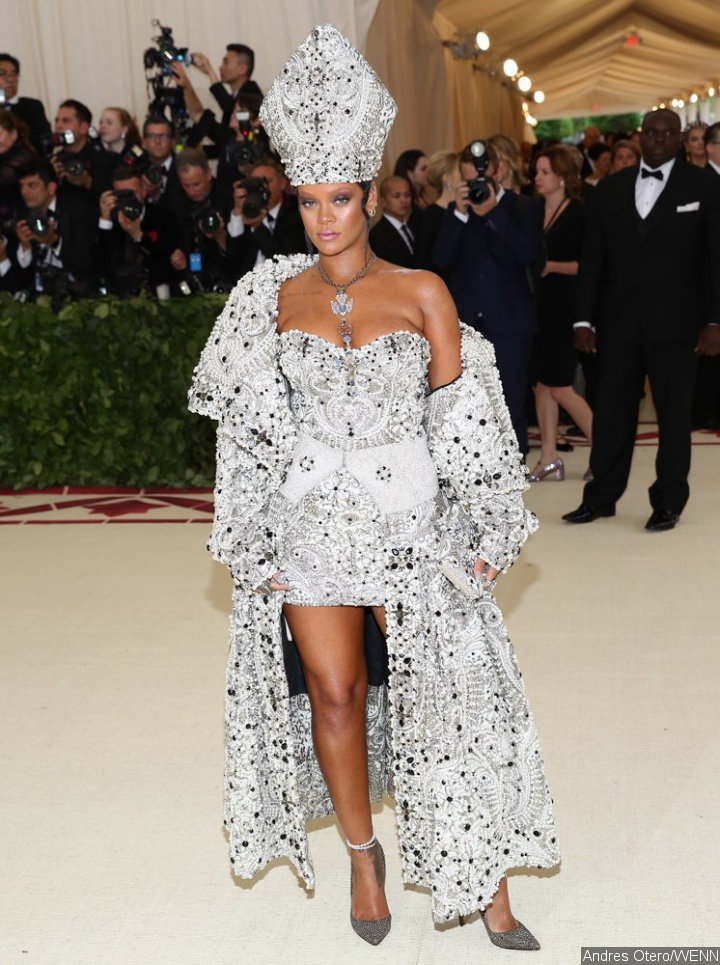 Rihanna wore a Pope-like hat to the 2018 Met Gala.

Even Rihanna, who is beloved by many people, couldn't escape the sentiment of Catholic community when she wore a Pope-like hat to accessorize her diamond and pearl-clad outfit to the 2018 Met Gala. The Barbadian singer was trying to comply with the theme of the event, which was "Heavenly Bodies: Fashion and the Catholic Imagination", but some people were not having it. People called her out on Twitter, calling the way she dressed "sacrilegious" and "disrespectful" to the Catholic religion. The "Work" hitmaker, however, apparently didn't feel the need to apologize for it, as she remained quiet amid the controversy. 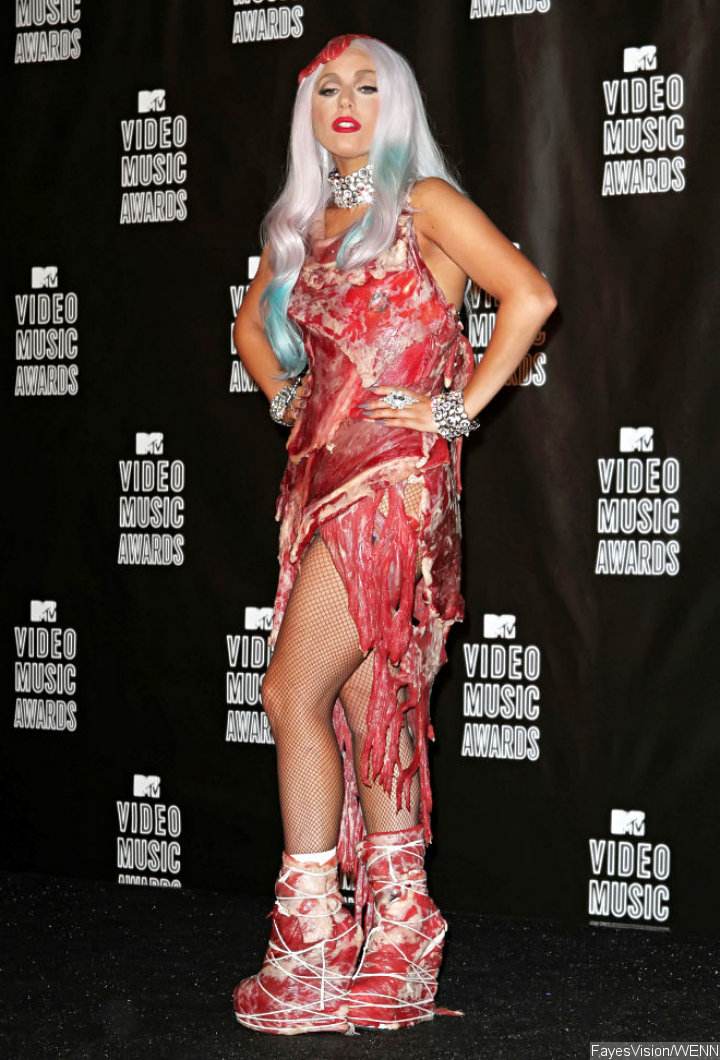 Back when she's known for her Mother Monster persona, Lady GaGa never fell short of outrageous costumes. Some of them have landed her in controversies, such as her bra which had two plastic assault rifles attached to it. She donned it during the "Born This Way" tour in Vancouver, weeks after the Sandy Hook Elementary School shooting that took place in December 2012. Her outfit was deemed "tasteless and inappropriate," but that wasn't the first time the "Poker Face" singer offended people. At the 2010 MTV VMAs, GaGa made a jaw-dropping appearance in a meat dress. PETA condemned the pop star, but she defended her costume as a statement against the governmental restrictions placed on the rights of gay soldiers. 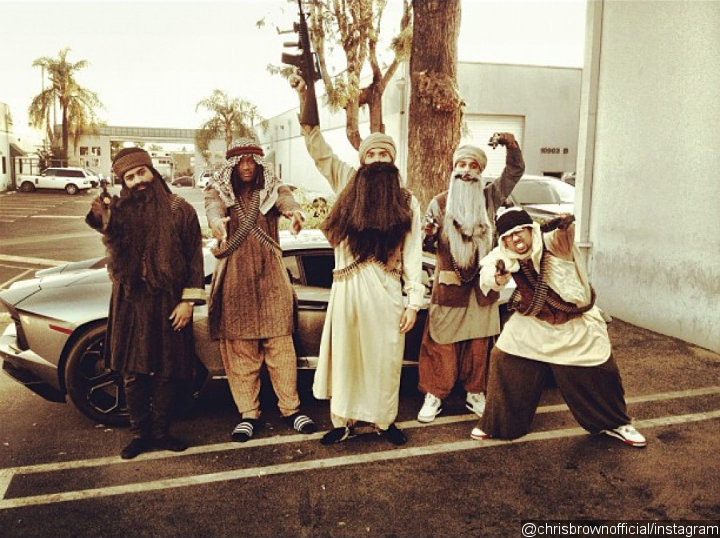 Chris Brown rubbed people the wrong way when he attempted to have a little fun at Rihanna's West Hollywood Halloween party in 2012. The "Beautiful People" hitmaker chose to dress as a member of the Taliban a.k.a. Arab terrorist by wearing a long tunic and headdress, complete with a fake thick beard and fake gun. He even posted on Instagram a photo of him and his friends donning similar costumes. Needless to say, he came under fire for his choice of outfits, which people dubbed horrifically offensive and awful among other things. The Grammy Award-winning artist, however, didn't show any remorse when asked about the uproar caused by his costume in an radio interview a few weeks later. "It's f***ing Halloween! It's a motherf***ing pagan holiday! We dress our kids up as satans, demons, little goblins and all this other s**t. Get over it, people!" he insisted.