Taking her travelling woes to Twitter, the 'Lip Sync Battle' host calls out the airline crew for not allowing her 15-month-old son Miles to sleep in a car seat during a flight.

AceShowbiz - Chrissy Teigen has criticised Cathay Pacific airline crew for not allowing her infant son to sleep in a car seat during a flight.

The star took to Twitter on Monday, August 19 to reveal her travel woes, complaining that the decision to prevent 15-month-old son Miles, from sleeping in the seat, could disrupt other passengers.

"Have no idea why my Cathay flight thinks it's more okay for a tiny baby to be rolling in pillows rather than sleeping quietly in his car seat," she complained. "Apparently car seats in a seat we bought next to us for just him is less safe? Honestly I just want everyone else around us to be peaceful and happy." 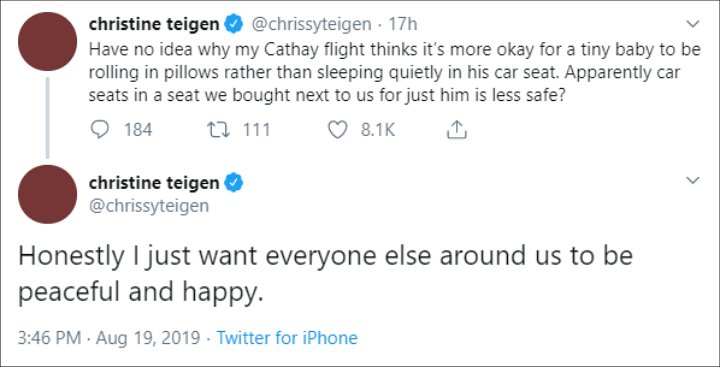 Chrissy Teigen called out Cathay Pacific airline crew for not allowing Miles to sleep in a car seat during a flight.

Fans were quick to offer the star, who did not reveal her destination, advice, responding that she should be allowed to use a car seat on a flight - but some pointed out that there may have been specific problems with the seat or the position of emergency exits.

Advice on Cathay Pacific's website on bringing babies under two years old on their planes does allow the use of a car seat, but specifies that it "must comply with the Cathay Pacific approved specifications".

In addition to Miles, Chrissy and her husband, the musician John Legend, have a three-year-old daughter, Luna.

Watch: Madonna Gets Serenaded by Her Children on 61st Birthday Celebration