The National Football League, his former teams and fellow football players are mourning the loss of the 36-year-old former Chicago Bears running back, who died with a female passenger after his bike slammed into a minivan.

AceShowbiz - Former NFL player Cedric Benson died in a motorcycle accident in Austin, Texas on late Saturday night, August 17. Cedric and a female passenger, who is yet to be identified, were pronounced dead at the scene. He was only 36.

Confirming the sad news, Cedric's attorney Sam Bassett says in an email, "Cedric was not just a client, he was my friend. He was immensely talented and fierce on the football field yet most have no idea the difficulties he overcame to achieve what he did. Though imperfect in some respects, once Cedric was your friend you understood how kind, sensitive and loyal he was as a man. He was like a younger brother or nephew to me. I will miss him very much."

According to TMZ which obtained footage of the aftermath of the fiery motorcycle crash, Cedric's bike slammed into a minivan at the intersection around 10 P.M. The other people in the minivan were not injured and stayed on scene to cooperate with investigators.

Cops say the minivan caught fire after Cedric's motorcycle slammed into it. They believe speed and poor visibility were factors in the crash. The driver of the minivan will most likely not be charged with a crime for the accident.

Hours before the incident, Cedric showed off his BMW motorcycle on Instagram Stories. "MY SATURDAY EVENING," he captioned the picture along with a series of heart emojis. 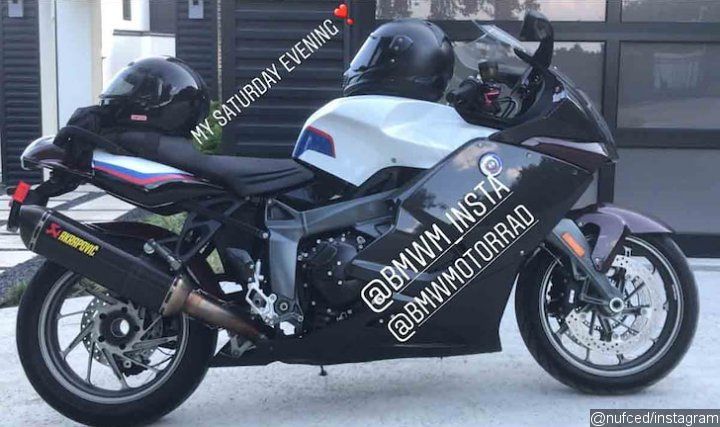 Cedric Benson showed off his motorcycle hours before the accident.

The NFL, his former teams and fellow football players have expressed their condolences following Cedric's sudden passing. "We mourn the passing of former @chicagobears, @bengals RB Cedric Benson," the National Football League posts on its social media pages along with a picture of the former running back in his Cincinnati Bengals jersey. Cedric played for the Bengals from 2008 until 2011.

Bengals president Mike Brown says in a statement, "Cedric was a fine football player for us. He played a principal role for several years here, including a couple of playoff runs. He was from Texas, and he showed his Texas toughness in leading us to a Division Championship in just his second season with us. His three consecutive 1000-yard seasons displayed the talent he possessed. Our organization is deeply saddened by his sudden and tragic passing. The Bengals extend our deepest condolences to Cedric's family."

Chicago Bears also posts a tribute to the Texas native, "Our condolences to the friends and family of former Bears running back Cedric Benson, our 4th overall Draft pick in 2005 and member of the 2006 NFC Champions team."

Green Bay Packers, announces the sad news on Twitter. "Our condolences go out to the friends & family of Cedric Benson, who passed away Saturday at age 36," it writes. "Benson played his final season with the #Packers in 2012." 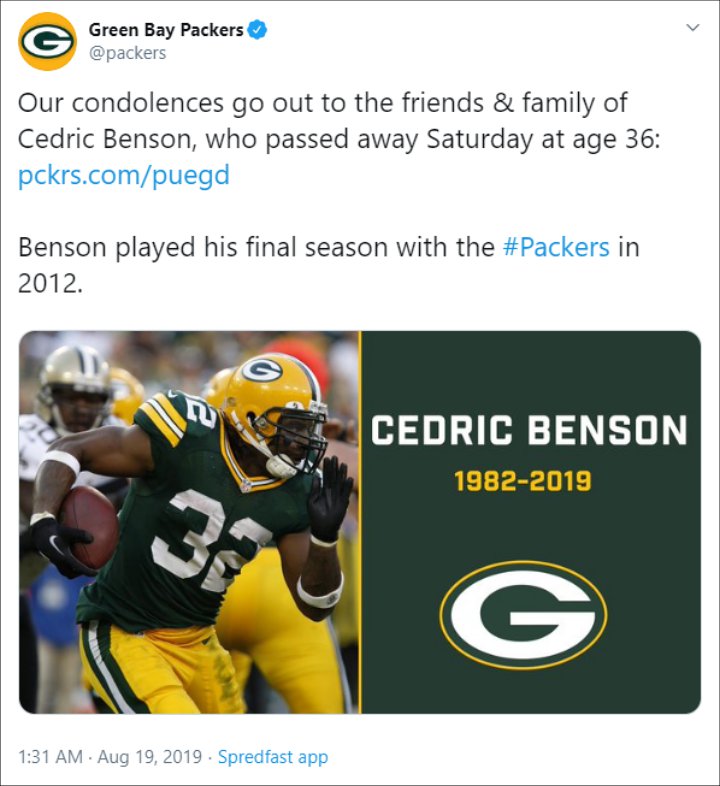 Cedric's former Chicago Bears teammate Thomas Q. Jones tweets, "Woke up to the horrible news of Cedric Benson's passing. My heart aches for him and his family. Sending love, peace and blessings their way. Gone way too soon my brother. Rest well young King. You will truly be missed....," adding the hashtags #GoneButNeverForgotten and #BearDown.

Another former Bears star Lance Briggs remembers Cedric on Instagram, "To my man Cedric B. I remember hearing all of these football stories about you when the bears drafted you 4th overall. You and I always got along..even with pads on, if I hit you or you hit me a little harder than usual..it was always followed by an apology..which was followed by a 'you good'. You ran all over us when you played for the Bengals. As mad as I was at the way we played that day. I gave you the biggest hug after the game..because I was so damn proud of you. R.I.P. #32."

50 Cent Trolls Wendy Williams for Coming to His Party Despite Feud, Doesn't Let Her In