The 'Lip Sync Battle' co-host calls the rapper 'pathetic' for his crude comment about the 'You Need to Calm Down' singer being a Democrat, while Sheryl Crow urges him to 'Spread love. Not hate.'

AceShowbiz - Kid Rock's comment about Taylor Swift's political stance has backfired. The avid Donald Trump supporter earlier took a jab at the pop superstar for voicing her support for Democrats last year, claiming that her motivation for getting political was driven by her Hollywood dreams.

"Taylor Swift wants to be a democrat because she wants to be in movies... period," he tweeted on Friday, August 9, "and it looks like she will suck the door knob off Hollyweird to get there. Oldest move in the book. Good luck girl."

It doesn't take long for Taylor's fans and other Democrat supporters to notice Kid's remark about the "ME!" hitmaker. They have since also taken to the micro-blogging site to defend the 29-year-old singer and hit back at the rapper. 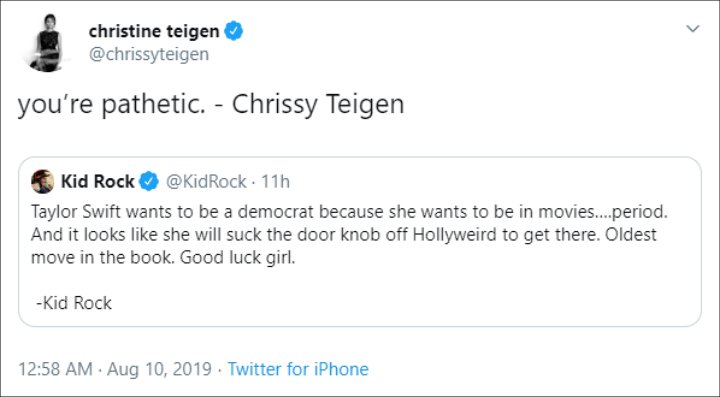 Not being one who holds back what's in her mind, Chrissy Teigen simply called Kid "pathetic" for attacking Taylor over her political stance. Fellow singer Sheryl Crow, meanwhile, urged Kid to "Spread love. Not hate. End of subject." 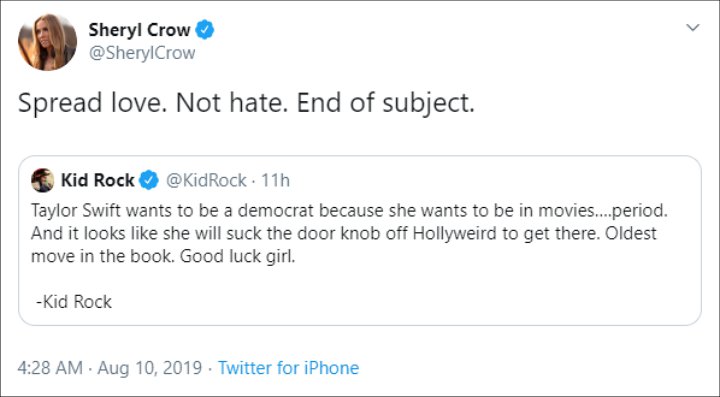 Others left comments on Kid's tweets, with one of them saying, "@KidRock are you sad because Ms. Swift is still relevant & you have to suck the door knob off of the furthest reaches of the conservative part of our country for people to even remember your name?"

"And with this tweet shows why Kid Rock is simpatico with Trump. They are both no talent, misogynist hacks," another compared Kid to President Trump. Someone else called him out for his "abusive behavior" toward Taylor.

"You're an undereducated, one hit wonder, piece of white trailer trash. No one gives a flying f*** what you have to say about anything," another slammed Kid. A disappointed fan of Kid added, "Kid Rock, I am a lifelong fan. My daughter was also a victim of the gun violence in Parkland. This obnoxious tweet just put an end to it. You can use your platform if you want to create more hate and violence, I will use my platform to say thank you to @taylorswift13."

Taylor herself has not responded to Kid's jab at her, while Kid has not addressed the backlash.