Theater star Autumn Guzzardi, who was married to audio engineer Dan Horton from 2013 until 2018, is believed to have thrown shade at the 'Bad Romance' songstress with her new Instagram post.

AceShowbiz - Lady GaGa's love life seemingly can't be free from drama, though it has nothing to do with the end of Bradley Cooper and Irina Shayk's relationship. The Grammy Award-winning artist recently sparked dating rumors with audio engineer Dan Horton and his ex-wife Autumn Guzzardi has apparently weighed in on the pair's new relationship.

Just a few hours after photos of GaGa and Horton kissing surfaced online, the 37-year-old theater star posted on her Instagram page a close-up picture of herself. She looked expressionless in the image and captioned it, "Poker Face," which happens to be the title of one of GaGa's hit songs.

Whether the reference to GaGa's song was intentional or not, people have been speculating that it's a diss at her ex-husband's new girlfriend and their new romance. "Lol. Never let a good crisis go to waste," one follower commented on her post.

Some others blasted Autumn for allegedly throwing a shade at the "American Horror Story: Hotel" actress. "Omg so classless and juvenile ! So your ex is dating lady Gaga," one criticized Dan's ex-wife. Another defended GaGa, "Leave gaga alone," while someone else similarly added, "Get over it, lady."

Some others, however, think that people overspeculate about Autumn's post. "Wait why are people hating? All she did was put poker face which is gagas song but also means an emotionless face (which has been used for decades) Someone explain," one user said.

GaGa was spotted kissing Dan during a brunch date in Studio City, California on Sunday, July 28. The 33-year-old singer was photographed cuddling up to the 37-year-old as they grabbed a bite to eat at Granville restaurant.

"GaGa and Dan appeared to be more than friends and were seen smooching multiple times while dining," an onlooker told PEOPLE. The eyewitness added, "They were kissing as they spoke really close up. Ironically, she had a table in the front near the sidewalk, so she was clearly okay with being seen. She seemed very happy when interacting with the guy she was with."

GaGa was previously in a relationship with talent agent Christian Carino from 2017 until they called it quits in February of this year. She was later linked to her "A Star Is Born" co-star and director Bradley Cooper, who split from his longtime partner Irina Shayk in June.

As for Dan and Autumn, they tied the knot in March 2013 and split in February 2018. Their divorce was finalized in May of the same year as they seemed to part ways amicably. The exes didn't have any kids, though they had a dog named Betty who now lives with Autumn. 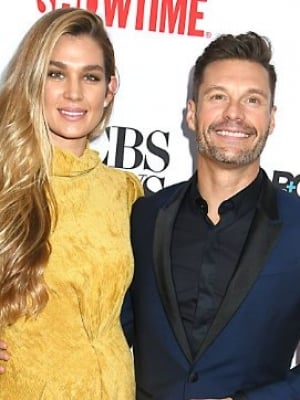 Dr. Dre and Wife Call It Quits After 24 Years of Marriage