Despite being left exhausted by her 'Sweetener World Tour', the 'Thank You, Next' hitmaker shares with fans how grateful she is for her success and their unwavering support.

AceShowbiz - Ariana Grande has shared a series of make-up free selfies from her sick bed as she recovers from a nasty bout of bronchitis.

The "7 Rings" hitmaker showed off a more natural look in the black-and-white shots on her Instagram Stories, with the star still looking radiant and offering a beaming smile despite not feeling her best.

"Why tf (the f**k) we up," she wrote on one picture, seemingly complaining about her early start to the day.

While she may be exhausted from back-to-back gigs on the U.S. leg of her "Sweetener World Tour", and suffering from a nasty infection, Grande was quick to assure fans she is grateful for her success and their unwavering support.

"I'm sleeeep... body, throat, everything tired as hell.... but grateful as f**k. too grateful to go back to bed if that's a thing," she posted on Twitter, alongside a photo of herself cuddling up with her late boyfriend Mac Miller's dog Myron. 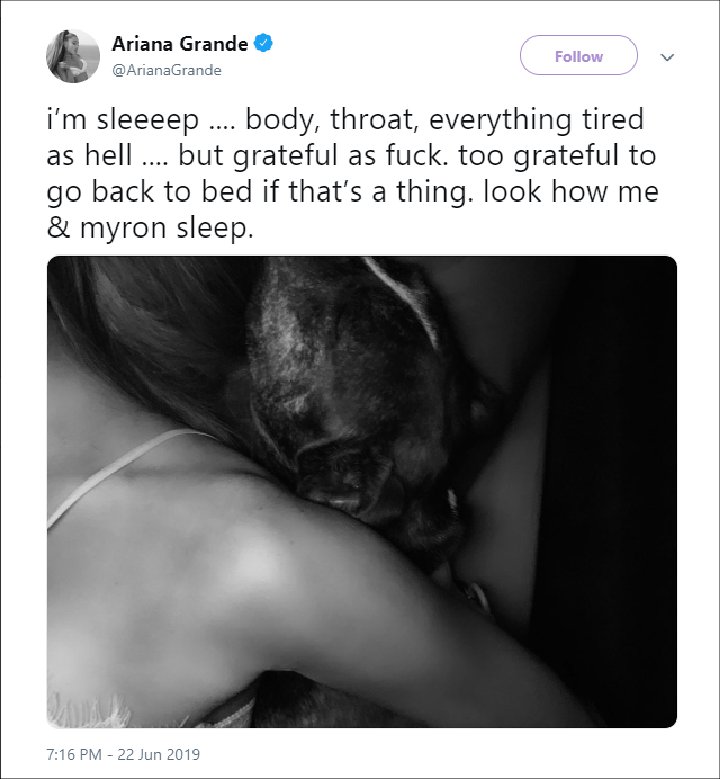 Ariana Grande admitted to being tired.

Grande, who performed in Boston on Saturday, June 22, later revealed she was watching horror movies to recuperate, and shared clips of "The Ring and The Grudge" on her Instagram Stories.

Earlier this week, the 25-year-old announced she had bronchitis, but assured fans she was on the mend. 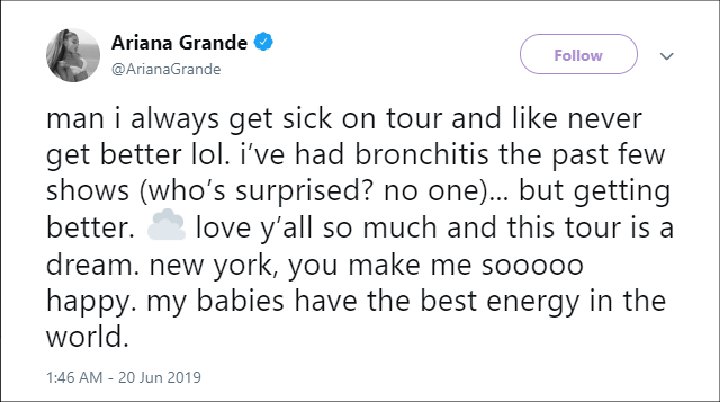 Ariana Grande announced she had bronchitis.

"Man I always get sick on tour and like never get better lol (laugh out loud). i've had bronchitis the past few shows (who's surprised? no one)... but getting better," she tweeted. "love y'all so much and this tour is a dream. new york, you make me sooooo happy. my babies have the best energy in the world."