The man parodying the former NFL star's social media account claims Simpson sent him direct messages in which he threatened the man with 16 knife emojis and the warning that 'I'm gonna blast your a** all over twitter.'

AceShowbiz - O.J. Simpson has been accused of sending threatening messages to a man who parodies his Twitter account. The convicted armed robber joined the micro-blogging site on Friday, June 14 under the username @TheRealOJ32 and said he would use it to "challenge a lot of that BS (bulls**t) and set the record straight" on various rumors about him.

Within hours, a parody account under the username @KillerOJSimpson was created, posting various contents that skewer the 71-year-old over his acquittal in the 1994 murders of ex-wife Nicole Brown Simpson and Ron Goldman. The profile picture of the account features an edited photo of Simpson grinning while holding a knife in a black-gloved hand. The account also uploaded a video of Simpson's Father's Day post with added audio of someone repeatedly screaming "Police! Help!" in the background.

Naturally unhappy with this, Simpson allegedly sent a series of direct messages to @KillerOJSimpson, telling him to shut down the page. The man tweeted, "Man, you would never guess who the hell just messaged me on Twitter in a DM. Look at this s**t." He then showed in a video an exchange of messages in which Simpson's account asked the parody page to be deleted over "false missleading (sic) content I didn't post." 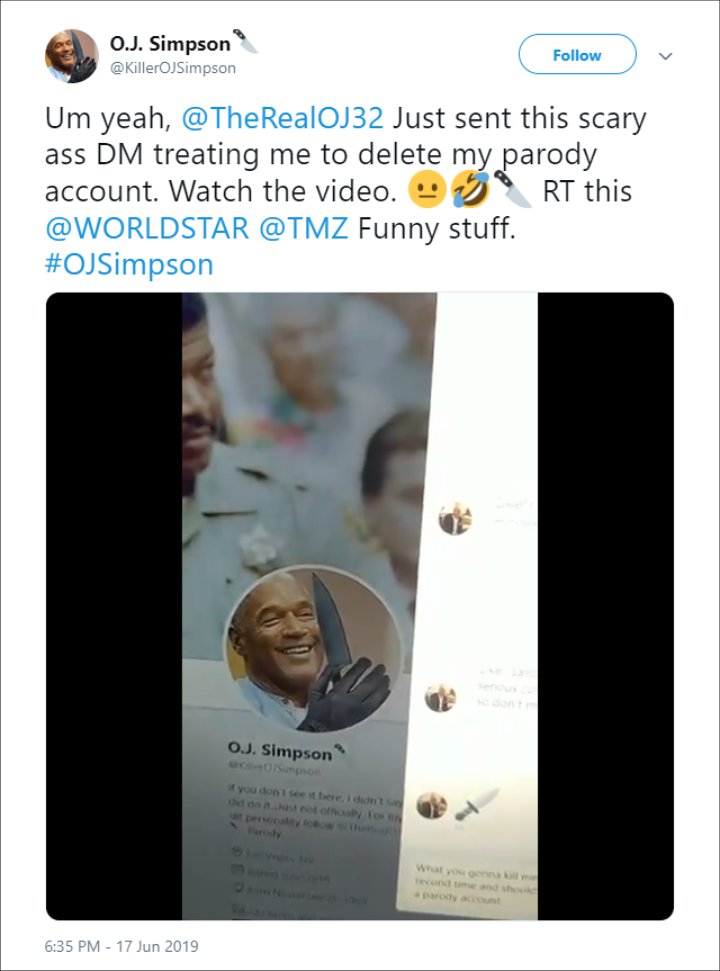 Rejecting the request, the parodist responded with a taunting message, "And if I don't? You gonna stab me too? In reality I ain't lying..You, me and millions know the truth. You Trippin' over a parody account lol Welcome to twitter bruh."

Simpson's account wrote back, "Like I said, delete this 'Parody' account as you call it or face serious consequences by me. I'll find your a** one way or another so don't mess with me. I got nothing to lose. Grow up!" The video showed the man sent Simpson emojis of a thumbs-up and a dagger, and Simpson's account replied with a knife emoji. "Look what his a** sent me! Like, for real dude? That's crazy!" the man said in the video.

In a second video, the man showed more messages that Simpson's account sent to him after the parodist posted the first video. That's when things got more heated as Simpson allegedly wrote to the man, "Seen that video you posted about me. You think I'm playing? Tired of all your bulls**t. I WILL FIND YOUR A** AND CUT YOU - Don't believe me? Just watch and see b**h."

Playing it down, the parodist replied, "Dude there are others that literally have more followers than me and more convincing than mine. LMAO You gonna cut me? Awesome. Is that what you said to Nicole?" Simpson's account responded with 16 knife emojis and the ominous words "you next."

The parodist said, "This is actually funny to me," and Simpson's account followed it up with another threatening message, "You just wait, I'm gonna blast your a** all over twitter..." The man replied, "Cool and when you do I'll be here." The video ends by showing another knife emoji from Simpson's account and a pending message from the former athlete.

The parodist said he has a third video of Simpson's direct messages to him which he hasn't posted yet. He has created a YouTube channel where the new video might be uploaded.

Simpson and his lawyer have not addressed the matter. The disgraced football player is currently on parole after serving nine years of his 33-year prison sentence for felonies of armed robbery and kidnapping.

A spokeswoman for the Nevada Department of Public Safety said that the Division of Parole and Probation "takes threats or acts of violence against public safety very seriously and is looking into the alleged complaints." Spokeswoman Kim Smith added, "If there is an alleged violation, an investigation will be conducted and appropriate actions will be taken by the Division and the Parole Board."

Bella Hadid Vows to Be 'More Responsible' After Being Accused of Insulting Saudi Arabia, UAE

O.J. Simpson Files Lawsuit Against Vegas Hotel After Employee Accuses Him of Belligerence