Prior to her appearance at the White House, the 'Keeping Up with the Kardashians' star informs her followers that she will be meeting the President for the 'Second Chance Hiring and Re-entry' event.

The "Keeping Up with the Kardashians" star has made the topic a priority ever since helping former convict Alice Marie Johnson win clemency from Trump last year (18), decades after the 63-year-old great-grandmother was handed a life sentence for a low-level drug charge.

Kardashian was among the big supporters of the First Step Act, which the Republican leader signed into law in December (18), allowing more than 1,000 prisoners to receive reduced sentences.

She has continued to work on releasing non-violent prisoners and those believed to be wrongly convicted, and on Thursday, she was invited to speak alongside the President at a special event in Washington, D.C., aimed at providing ex-felons with the resources needed to return to the workforce.

She initially alerted fans to the White House visit in a video posted on Instagram. "All right guys, I am heading to the White House to speak at the 'Second Chance Hiring and Re-entry' event," the new mother-of-four explained. "I'm so excited to announce some exciting things."

At the press conference, Trump said, "We're bringing Americans who have been on the sidelines back into the workforce, including former inmates. America wins when citizens with a criminal record can contribute to their communities as law-abiding members of our society."

Kardashian then stepped up to the podium and explained how she had decided to use her voice to "make a difference" after meeting inmates at various prisons across the country, reports the New York Post.

"The one thing I realised that needed so much support, was the re-entry of people coming home and seeing the lack of support that really existed...," she said.

"Seeing the compassion that (Trump) has had for criminal justice reform has been really remarkable," she added.

The reality TV beauty went on to reveal a new partnership with bosses at rideshare firm Lyft to aid the reintegration of ex-cons into society by providing them with vouchers so they can get to and from job interviews. 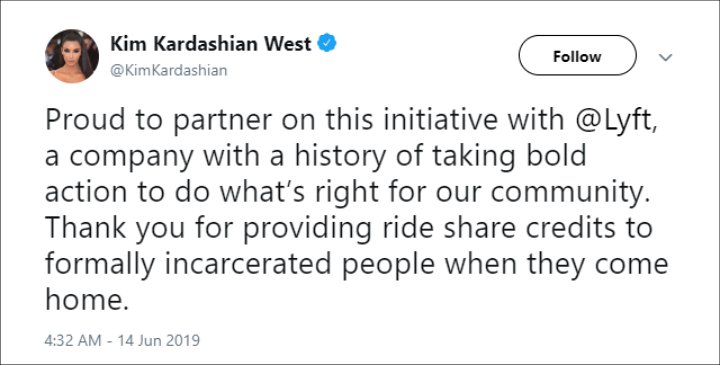 Posting about the initiative on Twitter, Kardashian wrote, "Proud to partner on this initiative with @Lyft, a company with a history of taking bold action to do what's right for our community. Thank you for providing ride share credits to formally incarcerated people when they come home."