The raptress savagely responds to a social media user who wonders how she managed to make it onto Billboard's Top 100 songwriters of 2018 list, before accusing her of hiring 'teams of writers.'

AceShowbiz - Cardi B apparently has had enough of haters constantly accusing her of not producing her own music. So when the "Bodak Yellow" hitmaker spotted a Twitter user doing exactly just that on Thursday, June 6, she didn't hold back to savagely clap back at the said user.

In a since-deleted post, the user was wondering how Cardi managed to make it onto Billboard's Top 100 songwriters of 2018 list when s/he believed that the femcee hired "teams of writers." Responding to this, Cardi wrote, "Because I do write a lot of my s**t that's the thing." However, she did admit that she didn't produce her songs entirely by herself.

"Yes just like every other artist I do have a couple writer that help with hooks but I wrote plenty of songs on my album specially my mixtape," she added. "Ya just flip s**t and ya want to believe the f**k s**t so bad but EAT IT UP B***H!" 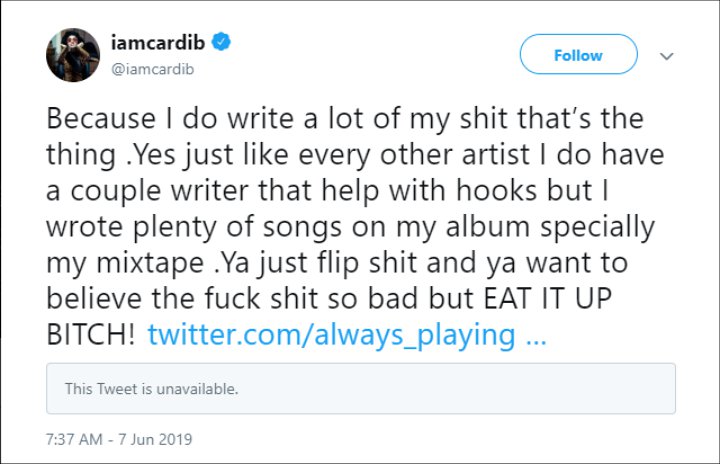 Cardi B hit back at a Twitter user who accused her of using ghostwriters.

Cardi has been accused of using ghostwriters ever since she released her debut album "Invasion of Privacy". Rapper Pardison Fontaine was said to be one of her ghostwriters, but she debunked the allegation during an interview on "The Breakfast Club" radio show.

"Pardison is not a ghostwriter, he's a co-writer," she said. "I credit him in all the songs that he been in. I even gave him a shoutout at the iHeart Radio Awards. The 'Be Careful' song -- I heard the song and was like, 'I like this.' It didn't have a hook or nothing. I just liked that verse and was like, 'I want this song for me.' I liked what it was saying, I liked this beat and we just worked on it. I'm putting my people on. They making money. I ain't pay him off and hide him."

Cardi is currently working on her sophomore album, which still doesn't have a title or a release date. However, she has previously expressed her wish to unveil the album this year.

Cardi B Lashes Out at Troll Calling Her Daughter 'Autistic'