Responding to the 'Dreams and Nightmares' hitmaker's lawsuit threat, The Cosmopolitan executives issue a statement admitting that they 'did not act in a respectful manner and were wrong.'

AceShowbiz - Rapper Meek Mill has received a public apology from bosses at The Cosmopolitan hotel in Las Vegas after he was refused entry to the venue last weekend, May 25-26.

The "Dreams and Nightmares" hitmaker claimed he had become a victim of racial discrimination after he was denied a suite at the top resort amid allegations suggesting he had previously been involved in an altercation on the premises.

He was also threatened with being arrested for trespassing if he failed to leave the hotel.

Meek subsequently called in his lawyer, Joe Tacopina, who demanded proof of the past incident, and vowed to sue, telling TMZ he would be seeking "heavy monetary damages" for "lying and humiliating" his client.

Now The Cosmopolitan executives have admitted they made a mistake, and have issued a formal statement apologising to the hip-hop star.

It reads, "We apologize to Meek Mill for how we handled the situation on Saturday, May 25, as we did not act in a respectful manner and were wrong."

"Meek Mill has not had any prior incident on our property. The Cosmopolitan has zero tolerance for discrimination and we pride ourselves on providing an inclusive environment. We look forward to welcoming Meek Mill back to the resort." 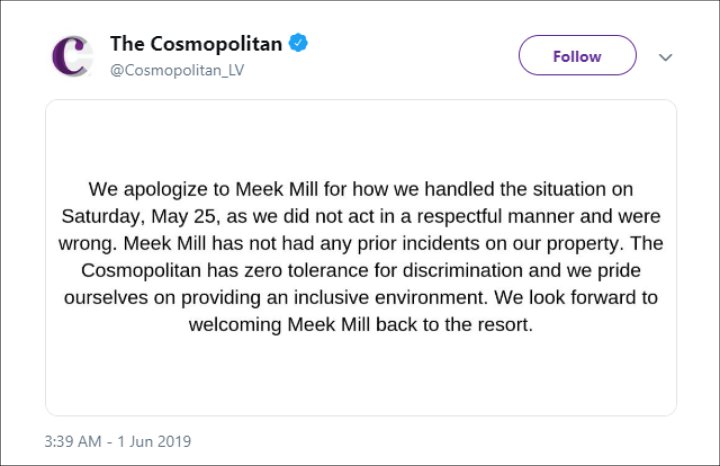 The rapper has yet to comment on the statement, but he is expected to officially acknowledge and accept the apology, and drop his plans to sue.

'Silicon Valley' Will End After Season 6: It's the 'Fitting Conclusion'