Although Mel B was hopeful the sound quality for the reunion tour will be better, a string of second concert attendees turn to Twitter to shame the girl band for their failure in fixing the problems.

AceShowbiz - The Spice Girls continued to battle sound issues as they continued their reunion tour in Cardiff, Wales on Monday, May 27.

Fans were left disappointed during the opening night of the group's Spice World - 2019 Tour in Dublin, Ireland on Friday, when they put Croke Park's technical engineers on blast on social media for ruining their experience at the band's first comeback show, with many walking out because they couldn't hear any of the stars' vocals.

Mel B (Melanie Brown) addressed the backlash on Instagram over the weekend, pledging to ensure the problems were sorted out in time for the "Wannabe" hitmakers' next gig in Cardiff.

However, it appears they weren't fixed completely, as a string of attendees took to Twitter after Monday's performance at Principality Stadium to complain about the sound quality once again.

"#SpiceGirls we're (sic) amazing tonight in Cardiff @principalitysta just a shame the sound was diabolical ... such a shame really needs to be looked into @spicegirls (sic)," tweeted one devotee, while another wrote, "@spicegirls it was a shame that you still had not fixed the sound at your Cardiff gig tonight. Couldn't hear half of it!". 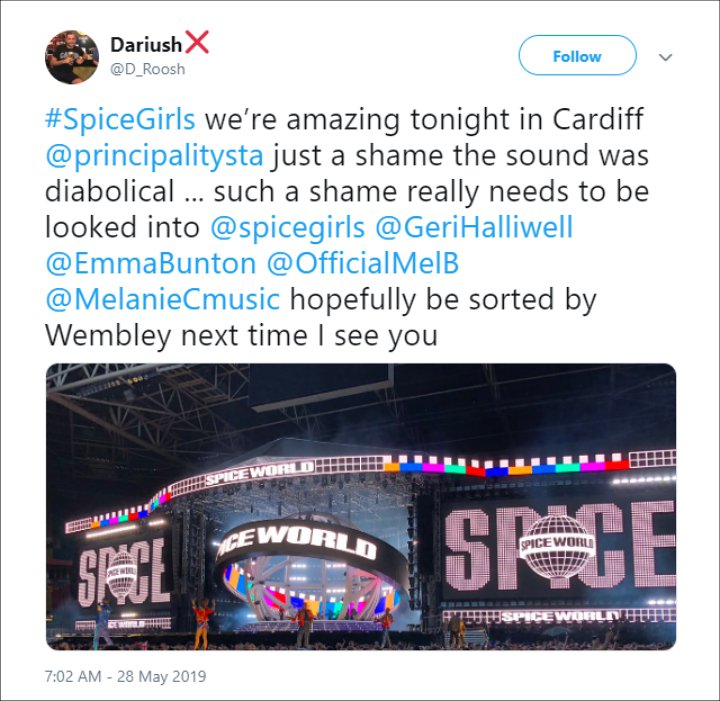 Another fan slammed the fact that the group didn't fix the problem.

A third crowdmember was even more enraged, and demanded Mel B, Mel C (Melanie C), Emma Bunton, and Geri Halliwell issue a formal apology: "@spicegirls you don't ever come to Cardiff and rip off people again. You should publicly apologise, and reimburse the fans who were affected by the sound issues. It was lazy and fraudulent not to fix the sound issues after the gig in Ireland went so badly. Apologise now!" 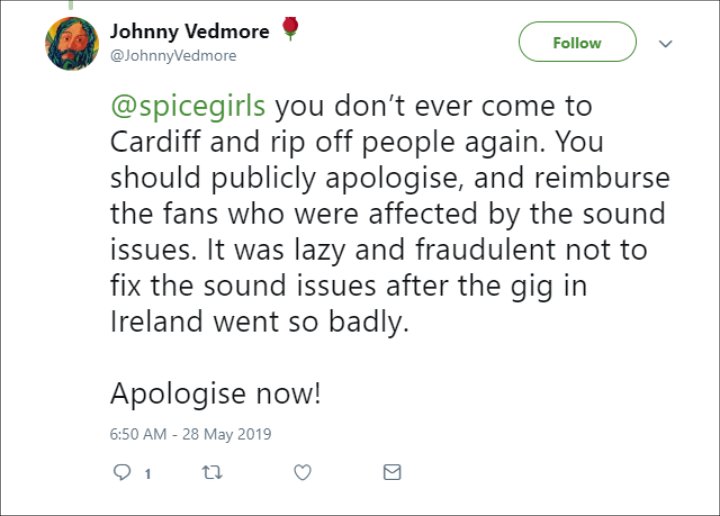 Another fan demanded an apology.

Reports suggest ticketholders with seats located on the floor were the ones mainly affected by the tech issues, although the pop stars and venue representatives have yet to comment on the claims.

The Spice Girls are next due to hit the stage in Manchester, England on Wednesday.