Lauren Mayberry reveals that the scale of the threats made by the 'Loyal' singer fans prompts her to decide against going home after tour while her group has to request extra police at their concerts.

AceShowbiz - Chvrches frontwoman Lauren Mayberry is terrified of staying in her own home due to threats from Chris Brown fans.

The Scottish singer and activist, along with her bandmates, released a joint statement on Friday, April 26, attacking their DJ pal Marshmello for working with Chris, due to the R&B star's past domestic violence conviction and a rape allegation against him.

Chris mocked the statement online, calling them "losers" and adding that he hopes they walk "in front of a speeding bus full of mental patients". The outburst sparked an onslaught of abuse from his fans, including death threats, and has led to the group requesting extra police at gigs and fearing for their safety.

In a tweet explaining the situation to The Guardian's deputy music editor Laura Snapes, Lauren wrote: "I am not staying in my own home when we finish tour because the threats we have received have reached such a scale. We have to have the police at our shows now. If that's what I deserve for saying mainstream music should be more morally conscious, then so be it." 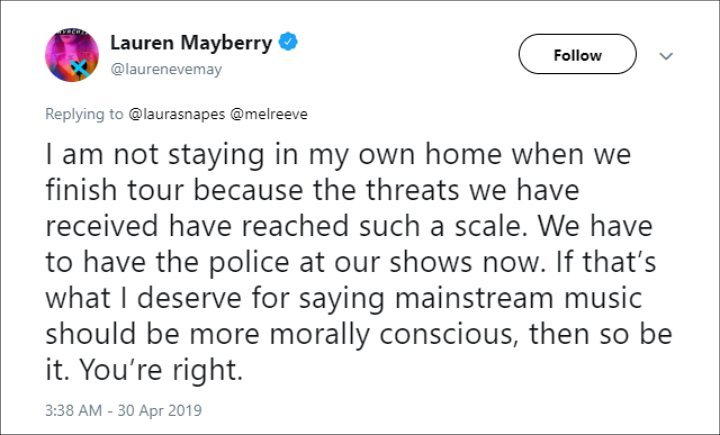 Lauren Mayberry explained her situation after receiving threats from fans of Chris Brown.

The "Mother We Share" musician had been arguing with Snapes over their criticism of Marshmello, as they themselves had worked with mainstream acts. She claims to have received death threats from Chris devotees fans due to her stance.

The U.S. singer pleaded guilty to assaulting his ex-girlfriend Rihanna back in 2009, and he's the subject of an ongoing lawsuit over an alleged rape in Paris; Chris and two other men were arrested in January after a 24-year-old woman alleged she was assaulted in a hotel in the city. He was later released without charge.

Following his arrest, Chris denied the allegations on Instagram, calling them false and disrespectful.

Chvrches are currently on tour in the U.S., promoting their third album "Love Is Dead".