The bride looks stunning in an ivory dress with low v-neckline and low back by Peter Pilotto with Christopher de Vos.

AceShowbiz - The long-burning question of what Princess Eugenie would wear for her wedding day has been answered when she arrived at St. George's Chapel in Windsor Castle. The 28-year-old British princess, who dyed her brown hair red ahead of the nuptials, wore an ivory-hued satin gown by designer Peter Pilotto with Christopher de Vos.

The dress featured fitted bodice and full pleated skirt, with long sleeves and v-neckline as well as low back, revealing her scars on her back from a surgery she had when she was twelve for scoliosis. It also boasted a full skirt embroidered with a floral design. According to The Telegraph, "the dress was developed layer by layer, constructing it from the corset and the complex underskirt to the fitted bodice and full pleated skirt."

Ditching the tradition of wearing a veil, she opted for a dramatic sweeping train instead. She's carrying a bouquet by Patrice van Hellen Oakes and wore satin peep-toe heels shoes from Charlotte Olympia. The bouquet consisted of Lily of the Valley, Stephanotis pips, hints of baby blue thistles, white spray roses and trailing ivy. 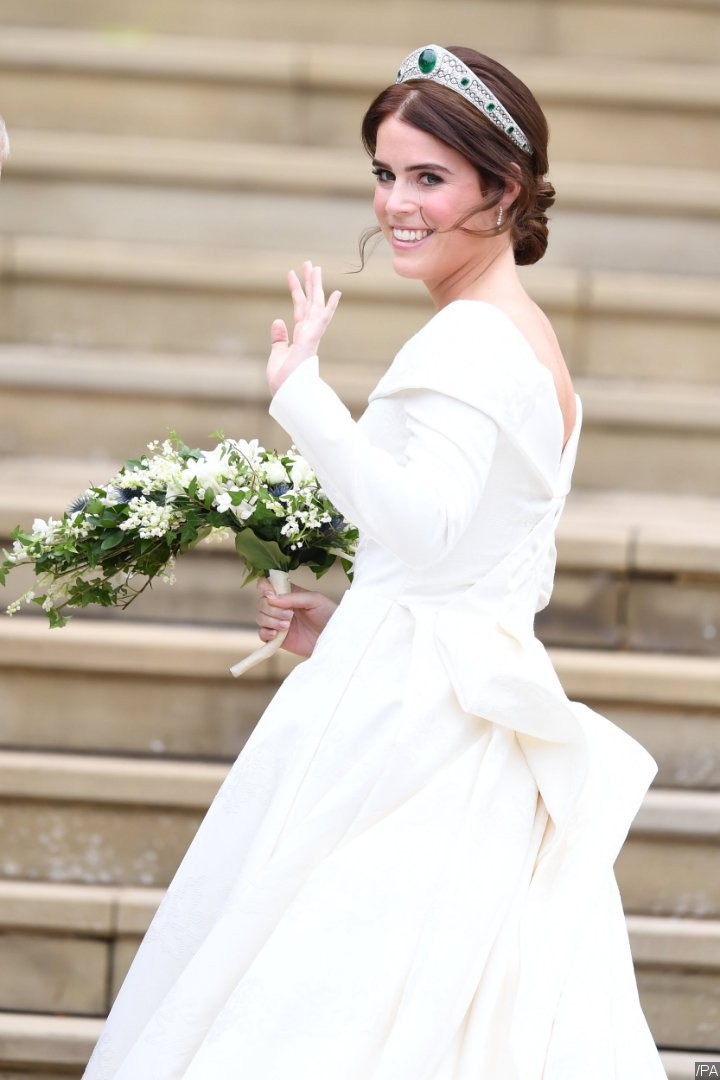 Perched on top of her head was an emerald tiara to math her wedding color theme, which was green. The tiara, which originally belonged to Dame Margaret Greville, was lent by Queen Elizabeth II who has had it in her possession since 1942. She completed her looks with diamond and emerald drop earrings which are a wedding gift from the groom. 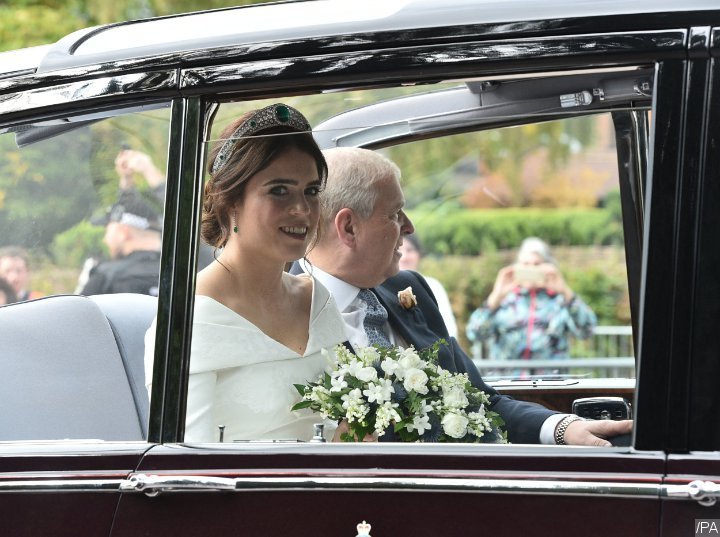 Princess Eugenie and her father Prince Andrew arrived in a classic car for her wedding.

Eugenie arrived with her father, Prince Andrew, who walked her down the aisle. She said her "I do" to Jack Brooksbank in front of more than 800 guests, including royal family members and celebrities such as Pixie Geldof, Demi Moore, Liv Tyler and Naomi Campbell.

Princess Eugenie Pregnant With Baby No. 2

Princess Eugenie to Split Time Between Portugal and the U.K. With Husband