The rumored pregnant cosmetics mogul covers up as she poses with her sisters Kourtney, Kim, Khloe Kardashian and Kendall Jenner in the latest Calvin Klein underwear and jeans ads.

AceShowbiz - %cKylie Jenner% is finally back in the spotlight for the latest Calvin Klein underwear and jeans ads amid rumors she is pregnant. However, the 20-year-old cosmetics mogul manages to hide her baby bump as she poses for cover-up looks during the photo shoot, which took place in October, just weeks after it was reported that she's expecting her first child with rapper beau %cTravis Scott (II)%.

OUR FAMILY. #MYCALVINS. Close like no other. @kimkardashian, @kyliejenner, @kendalljenner, @khloekardashian and @kourtneykardash shot by @willyvanderperre. Discover more at calvinklein.com/mycalvins. ⠀⠀⠀ ⠀⠀⠀ Show us your family and follow #MYCALVINS to see more from around the world.

Kylie joins her supermodel sister %cKendall Jenner% as well as half-sisters Kourtney, Kim and %cKhloe Kardashian% for the campaign. The Kylie Cosmetics owner, famously known for parading her hot body on her social media accounts before the pregnancy news broke in late September, doesn't show too much skin.

OUR FAMILY. #MYCALVINS. @kimkardashian, @kyliejenner, @kendalljenner, @khloekardashian and @kourtneykardash stick together, no matter what. Shot by @willyvanderperre. See more at calvinklein.com/mycalvins. ⠀⠀⠀ ⠀⠀⠀ Show us your family and follow #MYCALVINS to see more from around the world.

In one of the images, taken by photographer Willy Vanderperre, the famous sisters are all lying on a big red-and-white quilt. While her sisters are posing in their Calvin Klein underwear, Kylie has the blanket draped over her, revealing only her bra. She also grabs her sister Khloe's hand which is placed on her stomach. 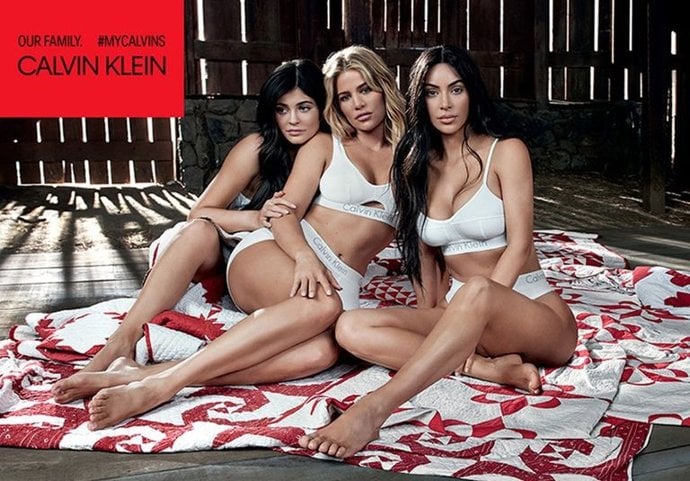 In another photo, the youngest Kardashian-Jenner sister is carefully positioned behind her siblings, with her chin resting on Khloe's shoulder. 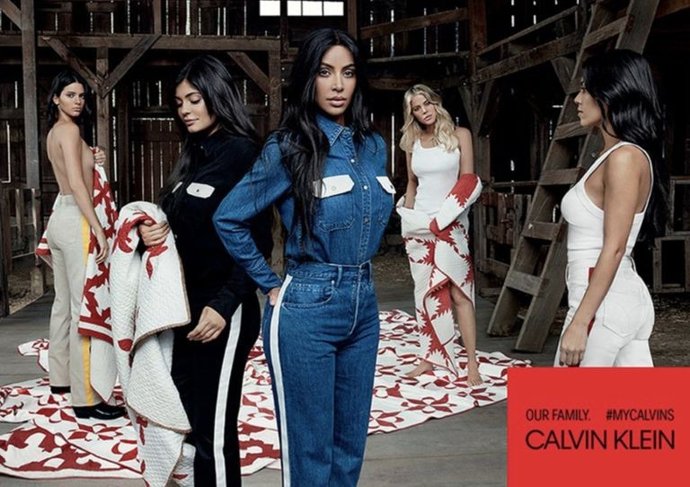 Another snap finds the "Life of Kylie" star, with the same blanket being draped over the bottom-half of her body, wearing a buttoned up denim shirt while Khloe and %cKim Kardashian% are lying in their underwear. 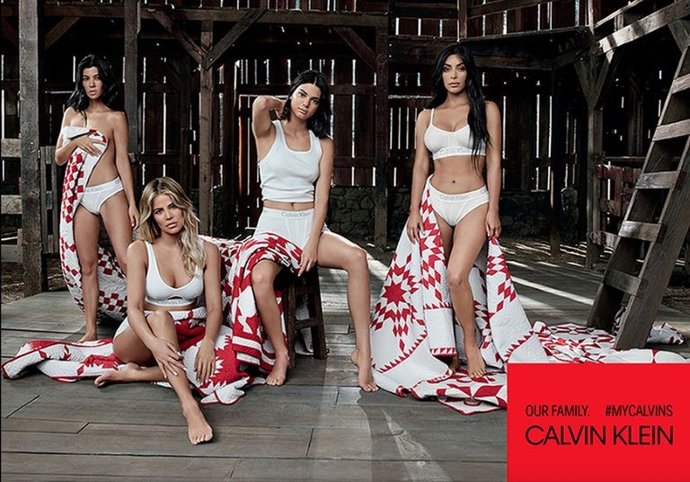 Meanwhile, in a video ad for the brand, all the sisters can be seen lounging on the same blanket while playing a game of "Never Have I Ever." Kim is the first to share, "Never have I ever got a tattoo." Kendall then admits, "Never have I ever dyed my hair."

While Kylie joins her family for these Calvin Klein ads, she was noticeably absent from the family Christmas card series last month. A source close to the famous family recently revealed to Entertainment Tonight that Kylie's "been taking time out of the spotlight to prepare for her new life as a mother." The source added, "[Kylie's] worked hard her entire life, and being a mother will be a lot of work, so now is a chance for her to recharge."

But this isn't "a permanent thing," another source told the publication. "As soon as the baby is born, she will make an announcement and introduce the baby to her fans," the source continued. "She will also address the fact that she went 'dark' on social media and in the public." Kylie reportedly "will release a photo" and "will acknowledge the baby. She's excited to continue to be her authentic self, and that will soon mean being a mother and sharing that with her fans."

Maisie Williams Is Going to Be BFF Sophie Turner's Bridesmaid

Kylie Jenner Slams Coronavirus Rumors: I Had Horrible Infection in the Throat

Kylie Jenner Is Not Getting Back Together With Travis Scott, According to Mason Disick