The Mother Monster stole the spotlight in a see-through fishnet dress which flashes her silver pasties and black briefs when she parties in London after performing at the Royal Albert Hall.

AceShowbiz - After performing for WellChild at the Royal Albert Hall with her singing partner Tony Bennett on June 8, Lady GaGa, accompanied by designer Philip Treacy, went to The Box nightclub for a party. The Mother Monster looked unusual in a mind-blowing outfit.

The "Donatella" singer stole the spotlight in a see-through fishnet dress which inevitably revealed her silver pasties and black briefs. She was almost naked in her racy outfit. She paired her ensemble with half-finger fishnet gloves and golden open-toe high heels. The 29-year-old singer also wore a big feathered headpiece which slightly covered her eyes. Besides, she put black stick-on eyebrows to make her eyebrows look thicker.

As the headpiece was massive and obstructing her vision, the "Born This Way" songtress relied on the guiding hands of the designer so that she would not bump into anything.

Earlier in the night, GaGa alongside her collaborator Tony met Prince Harry at the charity event. The "Born This Way" hitmaker wasn't hesitant to greet the 30-year-old Prince in her plunging dress. The three also posed for some photographs together. While the Prince thanked her for supporting the concert, GaGa gushed over him, saying that he was "fantastic" for his dedication to the charity. The concert reportedly managed to collect over 100,000 Euros for the charity. 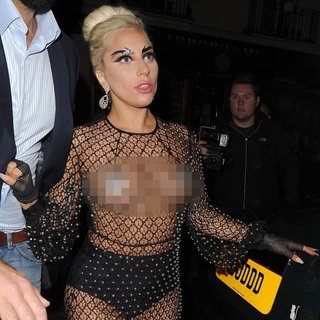 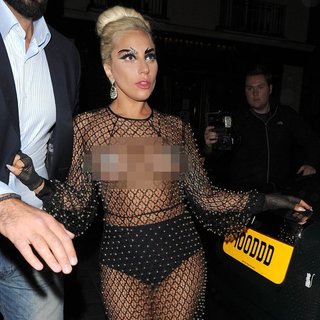 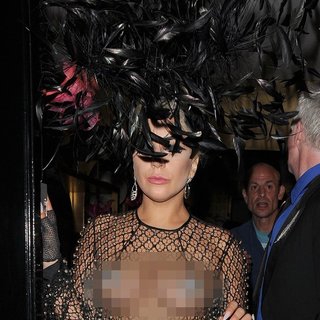 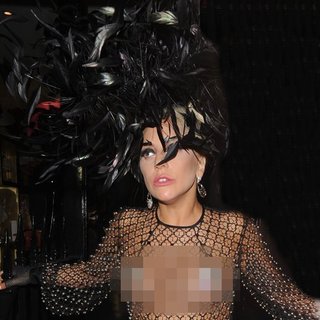 Ashton Kutcher Commends Mila Kunis for Being 'Executor' in Their Relationship