First Stills of 'Pirates of the Caribbean: On Stranger Tides' Shared

The new adventure of Captain Jack Sparrow begins after he is dragged forward by guards for an audience with King George II, who wants him to seek the Fountain of Youth.

AceShowbiz - Few days before unleashing a trailer for "Pirates of the Caribbean: On Stranger Tides", Walt Disney Pictures has given away the first stills from the movie. Debuted by USA Today, one of the photos features Johnny Depp's Jack Sparrow being dragged by two men in uniforms. The other image has the eccentric pirate and Penelope Cruz's Angelica soaking on a swamp.

This fourth "Pirates of the Caribbean" film begins as Sparrow is ordered by King George II (Richard Griffiths) to seek the Fountain of Youth. He then recruits Geoffrey Rush's Barbossa, his old nemesis, to join the mission. Along the way, he will meet a friendly mermaid (Astrid Berges-Frisbey) and be tempted by a wicked former flame, Angelica, and her sadistic father, Ian McShane's Blackbeard.

Terry Rossio, who writes the script along with Ted Elliott, confirms this journey is a standalone story. "The three previous films are a trilogy, with an intricate, interwoven tapestry of characters. I would call this a stand-alone type of story," he explains.

He additionally describes Cruz's character as "a kindred spirit who is a con artist at heart as well. She's not only a romantic interest, but an equal and effective adversary." As for other new characters, the mermaids, producer Jerry Bruckheimer dishes, "These mermaids are ferocious. On the surface they're beautiful, but once you get them underwater, they turn pretty scary." 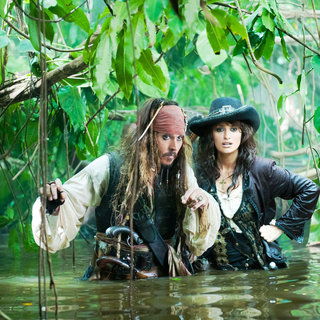