One of the pictures presents up-close shot of Michael Fassbender as Quintus Dias, the leader of Roman soldiers, while the other features a battle scene.

AceShowbiz - Two brand new photos from "Centurion" have been uncovered by Empire. While one of the images displays a battle scene, the other one presents a better look at leading man Michael Fassbender as he takes on his character Quintus Dias. Actor Liam Cunningham is spotted standing in the background, behind Fassbender.

Accompanying the photo, the site includes Fassbender's commentary on the movie. "There's certainly a lot of head-chopping," he said. "I guess you can always make modern-day parallels, to the occupation of Iraq. But it's the idea of someone who believes in an ethos, becomes disillusioned and comes to his own sort of beliefs. So there are parallels, and it's interesting when you take it out of our timeframe and stick it back 2,000 years."

"Centurion" is an action thriller set during the Roman invasion of Britain in A.D. 117 and based on the legend of the Ninth Legion, an army of 3,000 unstoppable Roman warriors who vanished without trace. It tells the story of Roman corporal Quintus Dias, who marches north with General Virilus' legendary Ninth Legion, under orders to wipe the Picts from the face of the Earth and destroy their leader, Gorlacon. No release date has been set for U.S. screenings just yet. 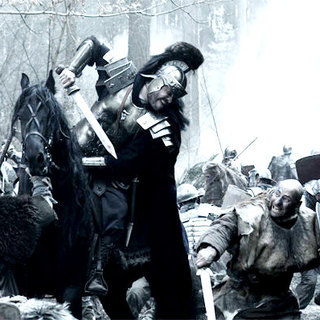 Penn Badgley Says Trust Comes After Passion in a Relationship