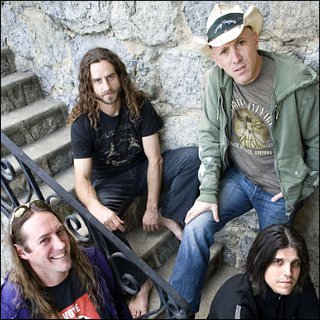 Satisfyingly making such a brilliant return to music industry with the worldwide success of album "10,000 Days", %cTool% seems very prepared to keep generating sensation for the rest of 2006 judging from the hectic schedule they slated to undergo after their North American tour that has been held in this year's spring. Continuing their European tour for the whole month of June up to July 9 going around Germany, France, Italy and Poland among others, the band has already confirmed their upcoming performances in series of music events for August, much to the fans' delight for sure. Also scheduled to gig in Seoul, South Korea at its Olympic Main Stadium by August 15, they will first appear at Street Scene Festival in San Diego on August 5 to then head for Japan to headline the Summer Sonic Festival on date 12 and 13 before joining the line-up of Reading Festival set to be held from date 25 to 27 in the town of Reading, Berkshire, England.

Widely recognized for introducing dark, vaguely underground metal to the preening pretentiousness of art rock, Tool originated in Los Angeles, California after a talented young guitarist named %cAdam Thomas Jones% (born on January 15, 1965 in Park Ridge, Illinois) convinced his friend, %cMaynard James Keenan% (born James Herbert Keenan on April 17, 1964 in Ravenna, Ohio), to try a career in music following his discharge from the U.S Army. In his search for other musicians to compile the band's line-up, Jones then invited his other pal, %cPaul d'Amour% (born on June 8, 1968 in Spokane, Washington), to join in as the bassist, but still could not find the appropriate one to fill the drummer position. Fortunately, the problem was quickly solved when his former bandmate from %cElectric Sheep%, %cTom Morello% of %cRage Against the Machine%, introduced him to Kansas-native %cDaniel Edwin Carey% (born on May 10, 1961 in Paola) and so completing the troupe's formation as a quartet in 1990.

Relying on Keenan in vocal, Tool delightfully found themselves inking deal shortly thereafter with Volcano Records and Zoo Entertainment, a subsidiary of BMG, to thus release their first commercial effort, "Opiate", on March 10, 1992. An EP containing six extremely dark songs plus a hidden track entitled "The Gaping Lotus Experience", the work was quite successful in gaining the band initial public notice, particularly through single "Hush" of which music video controversially featured all members in naked condition with parental guidance stickers covering their private parts while their mouths were sealed by duct tape. This subsequently gave the group enough confidence to launch a full-length album called "Undertow" in April 1993 and, thanks to the exposure at the year's Lollapalooza that the result wonderfully turned out to be more than satisfying. Including such blistering hit tracks as "Sober" and "Prison Sex", the album gloriously soared to the first rank of Billboard Heatseeker, boosting the troupe's profile in mainstream music scene for sure.

Amidst the success, however, the controversial matters still went on as MTV decided to stop the airing of "Prison Sex" music video because of its symbolic dealing with the sensitive subject of child abuse while the cover art of the album itself was considered insulting enough that it prompted Wal-Mart to present a picture of huge bar code instead. This was worsened by the departure of d'Amour in 1995 to pursue something more experimental out of the group yet thankfully the remaining members were quick to find his replacement in %cJustin Gunnar Walte% Chancellor (born on November 19, 1971 in Kent, England, U.K), a former bassist of English band %cPeach%. With this new formation, Tool indifferently went on to produce their third LP, "enima", which smoothly touched the market on October 1, 1996. Though they had to see their video of the album's single, "Stinkfist", encountering difficulty in gaining airplay due to the offensive connotations, the troupe really stuck harder this time when the record fantastically made its way to peak at number 2 on The Billboard 200.

Much to the four men's delight, the sweet outcome joyously proceeded to a greater attainment in 1998 when they satisfyingly obtained a Grammy Award in the category of Best Metal Performance through single "aenema". In the middle of this excitement, however, a legal problem shockingly occurred when the band faced a lawsuit alleging contract violations filed by their music label, Volcano Records, thereby putting the quartet into a great strain besides forcing them to delay the process on making their subsequent work, much to fans' disappointment. It was not until Tool reached settlement with the company several years later that the troupe ultimately threw out their fourth album, "Lateralus" (2001), into the market after previously launched a box set entitled "Salival" in 2000. Continuing the glory of "aenima", it went right away to top The Billboard 200 in its premiere week besides spanning a smash hit of "Schism" which led the group to proudly secure their second Grammy Award in the same category by 2002.

After taking a hiatus for a half decade, Tool then made their comeback in 2006, at first releasing single "Vicarious" on radio by April 17 before unveiling their fifth major LP, "10,000 Days", on May 2 in the States. Both joyously resulted tremendously well as the tune penetrated the top 3 of either Billboard Mainstream Rock Tracks and Modern Rock Tracks while the album fabulously sold around 564,000 copies a week after its release to thus enter The Billboard 200 chart at number one. What's more, "10,000 Days" marvelously also worked its way to reign the charts in some parts of the world, striving to the first rank in countries like Australia, New Zealand, Norway, Netherlands, Austria, and Poland.

Besides taking over music charts all around the world, "10,000 Days" also won Best Recording Package at the 49th Grammy Awards while its lead single "Vicarious" was nominated for Best Hard Rock Performance. Following the win, Tool continued hitting the road in support of the album until early 2008. The band took a short break after that, before launching a summer tour that began on July 18, 2009 in Commerce City, Colorado at the Mile High Music Festival. In addition to that, they headlined Lollapalooza 2009.

Tool later took another break, though this lasted longer than the previous one. Later in 2012, the band held a winter tour that took place across cities in the United States and Canada in between January and February. They also traveled to Japan to perform at Ozzfest Japan in May 2013 as they pursued their own musical projects. For instance, Keenan embarked on a tour with %cPuscifier%.

As for the four-piece group's fifth album, its release was forced to be delayed due to family commitments and ongoing lawsuit involving their music. Tool managed to focus on recording their album again later in March 2015, after their lawsuit had been settled in their favor. However, they didn't rush their work to meet an arbitrary deadline.

While working on the new album, the band announced in 2017 that they would be embarking on a North American tour that kicked off in May, before Chancellor gave an update on their album and stated that it was near completion. Later in June 2018, Keenan promised to release Tool's long-delayed album next year.

After much anticipation, Tool finally released two songs off the album, which is titled "Fear Inoculum", in May 2019. Entitled "Descending" and "Invincible", the songs were debuted live at the Welcome to Rockville Festival in Jacksonville, Florida. "Fear Inoculum" itself hit the stores on August 30, debuting at No. 1 on Billboard 200. It marked their third No. 1 album on the chart.