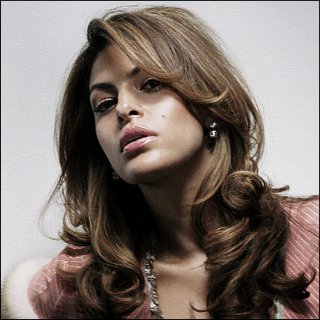 The thought of being a Hollywood movie star probably has never crossed the mind of Eva Mendes before. What she had intended to do was to concentrate on her study in marketing at California State University in Northridge, yet fate has directed her to undergo a totally different path. Looking back on her early life, she was born on March 5, 1974 in Miami, Florida. Her Cuban parents then took her along with her three siblings to settle in Los Angeles. She spent most of her youth and spirited life there, studying at Herbert Hoover High School in Glendale until her graduation in 1992. It was when she attended the university that things began to change gradually. A talent agent apparently noticed her picture while browsing the portfolio of a photographer who appeared to be her neighbor. Getting interested, the agent persuaded her to pursue a career in the entertainment field.

After some consideration, Eva eventually decided to leave her study and started to learn acting under the guidance of the professional instructor, Ivana Chubbuck. Meanwhile, she began to work her way up to reach success by appearing in commercials and music videos. In 1998, she took a step further, playing small roles in some TV series, such as "Mortal Kombat: Conquest" and "ER." She also made her big screen debut during the year through "Children of the Corn V: Fields of Terror." Nevertheless, she was utterly disappointed with her performance in the film as she had commented: "I did 'Children of the Corn V' without studying or anything, and I was mortified by how horrible I was. I was so bad, it was so hard to watch, I was actually crying at dailies. I didn't understand it. But I wanted to understand it, and I wanted to be good at it."

Being determined to be better, Eva kept developing her acting skills while taking small roles in "A Night at Roxbury" (1998) and "My Brother the Pig" (1999). Her name began to make sound after she starred in a thriller movie entitled "Urban Legends: Final Cut" (2000). However, it was "Training Day" (2001) that brought her to the surface for she received positive reviews which led her to gain public attention and admiration. She continued to amaze people through her performance in "All About the Benjamins" (2002) so that she was considered one of the beautiful and talented Latin actresses. Her star shone more radiantly when she got a leading role in "2 Fast 2 Furious" (2003). This action flick soared to be a box-office hit with127 million U.S. dollars income, directing her to embrace popularity along with huge success.

Eva created sensation throughout 2003 by appearing in three other notable movies, namely: "Once Upon A Time in Mexico", "Out of Time", and "Stuck On You." In 2005, she secured the lead performance in the romantic comedy "Hitch," alongside Hollywood celebrated black actor, Will Smith. Her other film projects in the same year were "The Wendell Baker Story" and "Trust the Man." She afterwards was cast as Roxanne Simpson in "Ghost Rider" (2006), being in the same scene with Nicholas Cage, Wes Bentley, and Peter Fonda. Apart from her acting career, Eva has also been noticed as Revlon's international spokesperson. Being the representative of the cosmetics brand, she actively supported its campaign to fight breast cancer. Looking upon her attainment, it seems Eva has accomplished what she once said of showing the world a whole different kind of Latin woman.