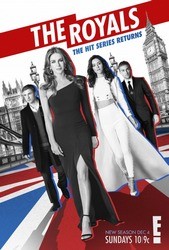 "The Royals" will follow a modern-day royal family as they live life in the public eye. Hurley plays Queen Helena, described as a woman who has the power, beauty and intelligence to get what she wants. She's keen on controlling the public image of her famous family. King Simon (Regan) is the family's moral compass, but is quick to place his family over the people he rules over.

Moseley, star of The Chronicles of Narnia films, plays Liam, the youngest son of the king and queen. He suddenly finds the spotlight on him when he becomes the heir apparent to the throne. Like any young man, Liam enjoys the perks of being a sought after eligible bachelor, but enters a relationship with a young American woman whose morals cause her to butt heads with the monarchy. Park plays Eleanor, the sole daughter in the royal family. She's constant tabloid fodder.

The second season picks up eight weeks after the tragic murder of King Simon (Vincent Regan) by an unknown assailant. Cyrus, Simon's arrogant brother, has taken the throne after deeming the Prince and Princess illegitimate, with the help of the Queen to fabricate the paternity results. While Cyrus is convinced the Queen is on his side, her majesty has her own agenda in mind: change the succession of the Royal Family and make the power shift to the Queen if anything should happen to yet another King.

Meanwhile, Liam vows to bring his father's murderer to justice and teams up with an unlikely ally to do so, the duplicitous bodyguard Jasper who had been relieved from his duties after sleeping with both the Princess and the Queen, and had once been considered a prime suspect in the King's attack that led to his death. However, the two young men, who are both working to mend their respective broken hearts, have bonded over their mutual concern for the Princess' wellbeing and seek to bring a common enemy to justice.

While King Cyrus struggles to win over a country of people who despise him due to his inability to relate and general distain disdain for common society, Eleanor sinks further into despair as she searches to have a real connection with anyone despite her seemingly fairytale life as a princess. Her bodyguard blackmailed her and slept with her mother, her brother is locked in a vengeful tunnel vision, her mother just revealed her father isn't who she thought, the new King hates her, and the only person who ever believed in her was murdered with the last words he spoke to her being of his disappointment.

Now, Eleanor finds solace in excessive amounts of booze, drugs and random sex, while still trying to navigate through the murky waters of real romance. Not since Marie Antoinette has there been so much anarchy in the monarchy.

Season three picks up two weeks after the execution of King Simon's murderer, Ted Pryce, the former head of the Royal Family's security. Queen Helena is on a mission to prove that Prince Liam and Princess Eleanor are the legitimate heirs to the throne and the children of King Simon. However, Simon's brother and the current ruler of the monarch, King Cyrus will stop at nothing to ensure the Queen cannot prove their paternity.

Meanwhile, Prince Liam and Princess Eleanor are at the height of their fame and while she struggles to stand for something - or anything, a mysterious #KingLiam hashtag has begun to take England by storm, calling for an uprising in support of the hero Prince. However, unbeknownst the Royal Family, their world is on the verge of being rocked harder than ever.

The fourth season of "The Royals" picks up after the charming, potentially duplicitous, Prince Robert (Max Brown) is crowned King of England. Prince Liam (William Moseley) and his recently dethroned uncle Cyrus (Jake Maskall) form an unlikely alliance, Queen Helena (Elizabeth Hurley) struggles to control her unruly brood as she figures out her role in the palace.

And, after a heated on again-off again relationship, bodyguard Jasper (Tom Austen) tries to capture Princess Eleanor's (Alexandra Park) heart one more time just as they are about to face their biggest obstacle yet.

Royals, The News and Articles 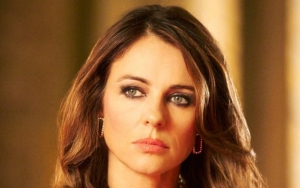