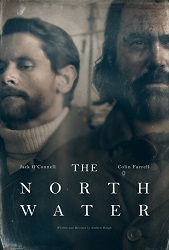 The North Water is a five-part limited series based on Ian McGuire's bestselling novel of the same name. Set in Hull, England, and on the ice floes of the Arctic in the late 1850s, the series follows the story of Patrick Sumner (Jack O'Connell), a disgraced ex-army surgeon who signs up as the ship's doctor on a whaling expedition to the Arctic. But the ferocity of the elements is matched by the violence of his crew mates, particularly Henry Drax (Colin Farrell), a harpooner and distinctly brutal force of nature. As the true purpose of the expedition becomes clear, confrontation between the two men erupts, taking them on a journey far from solid ground and way beyond the safe moorings of civilization.

Is Sha'Carri Richardson Joining Next Season of 'Celebrity Big Brother'?