Everyone's thrilled about the return of Tiny, the interstellar explorer robot, back from her mission to Titan, but none more so than Dr. Huggins, who's been replicating Titan's atmosphere and is eagerly anticipating Tiny's recovered samples of Titan's elements to perfect his experimental biosphere. And Tiny isn't the only visitor to Eureka today: because of Allison's recent security breach, a relationship auditor, Warren Hughes, is in town to examine whether Allison and Carter should be allowed to continue their relationship.

Moments after Tiny lands, however, a massive explosion blows her limbs all over Eureka. Carter discovers a giant sinkhole caused by methane gas, prevalent on Titan, that's leeching into the ground and eroding it from underneath. It seems Tiny's samples are too generous, and threaten to suck the whole town under the earth!

Getting Eureka out of this mess will be tougher than usual due to the rash of lovesickness spreading through town. Carter and Allison are on edge under Hughes's scrutiny, while Henry worries that he'll never be enough for Grace, who knew his alternate self for so many more years than real Henry's known her. Zane's criminal record has been erased, meaning that he's free to leave Eureka if he chooses, and Jo can only show her hurt feelings via intense physical affection. Fargo and Holly are twitterpated for each other, but they have differing ideas of how to dissipate the tension. Holly thinks they should go for a roll in the hay, but Fargo really likes Holly and doesn't want to miss the sweetness of getting to know her.

Grace and Henry discover that Tiny's samples were securely sealed, meaning the heaps of toxic gas didn't come from her but from somewhere in the town. A fog of ethane, methane and ammonia overcome a test greenhouse, knocking Jo and Grace unconscious until the genetically modified plants in the greenhouse grow at lightning speed and absorb the dangerous fumes.

The team realizes that Huggins has been dumping the gas from the experimental biosphere into Eureka's now-overloaded sewer system, and it will blow up the whole town unless someone can don the Titan space suits and direct the toxic gas into the greenhouse. Holly and Fargo are the only ones who can do it, so they set aside their sexual tension and win the day. Once the town is safe, Fargo tells Holly how he really feels, and she agrees to let their relationship go at its own pace. Jo takes advantage of this great success to throw Grace and Henry a quiet, simple wedding, just the way they wanted it.

Carter and Allison worked brilliantly under the pressure of the crisis and are sure that this will win them the approval of the relationship auditor, but he surprises them by saying that they care for each other too much, making their relationship a liability. He directs them to terminate their relationship, or resign their positions. 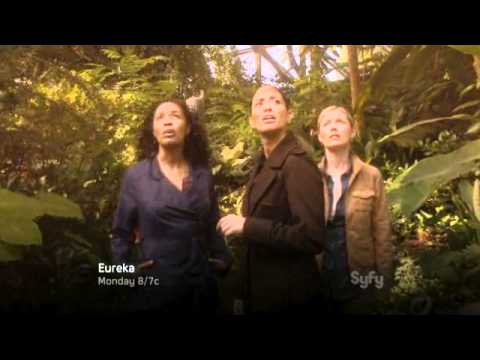