As Allison heads off to a conference, she leaves her kids in Carter's care. He tries to take the weekend off, but of course nothing goes according to plan in Eureka and it's not long before he gets a call from Jo. It seems that Dr. Holly Martin, the representative who's checking out the unauthorized FTL trip, had Fargo all worked up and - POW - he zapped her with the FTL drive and... made her disappear! Jack tries to get Andy to cover the issue when, behind his back, Kevin grabs the keys to the jeep and dashes off to look for the missing scientist.

Meanwhile, things aren't going well for Allison either. On the way to her conference, she blew a tire on a deserted road, where a girl's father just drove over a cliff. Allison springs into action, then finds and saves the girl's father.

Back home, Jo and Carter find Kevin at the outskirts of town, with Dr. Martin in tow, completely thrilled by her trip. Jo tries to keep her from spilling too many beans to the government - if information gets out that the FTL drive is based on the same device that sent everyone back in time, all of their lives could be in danger. And Zane won't let up on Jo ever since he found out they were an item in the alternate timeline. Just when she thinks she has him in check, he shows up at her house with a blowtorch and burns the whole thing to the ground!

But if you think this is the biggest problem of the day- think again. A stasis field, an anomaly that stops time within a certain radius, is growing, and unless Carter can stop it, the whole town will be frozen in time. They discover that the growth is coming from Henry's garage just as they discover what caused it-Holly. Holly's a nervous wreck when dealing with people so she embedded hypnotic suggestion software into her mp3s to help her cope with her anxiety. But the software got downloaded to Eureka's main database, turning every song, from "Burning Down the House" to "Eye of the Tiger" into a hypnotic suggestion that can't be resisted by the listener. This explains Zane's arson and Fargo's assassination attempt! As for the stasis field, Henry and Grace were listening to "I'll Stop The World and Melt With You" when "inspiration" struck.

While Holly reworks the software to reverse its effects, Carter dons his uniform and heads to Henry's garage to shut down the field. But Kevin realizes that Carter may be in danger and steals another car in order to save him. He shows up just as Jo, under the hypnosis of Bob Marley's "I Shot The Sherriff," fires her gun at Carter, who slips into the stasis field for safety. Kevin switches the playlist to "Why Can't We Be Friends," thereby freeing Jo, who throws her Kevlar-suited body between Carter and the bullet as Kevin cancels the stasis field.

Later on, Allison returns to the recovered Eureka with a splitting headache. She believes it came from a fall she took in her rescue effort. Yet, little does she know the whole experience is a hallucination stemming from a device planted in her brain by none other than Beverly Barlowe. 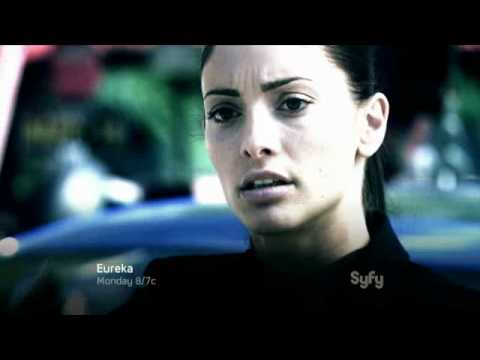