Wedding bells are ringing in Eureka, and that can only mean one thing: two robots are in love. Andy and Sarah were set to tie the knot, but when Sarah gets cold feet, Andy retreats from society to process the disappointment. And human love isn't going so well, either - Zane knows something's up with Jo, but she's so heartbroken over losing her love to an alternate timeline that she can only snarl at him. Fargo does his best to protect his friend by setting Zane on a tough assignment of building an ion damper for a top-secret project.

Zane, being - well, Zane - brings the ion damper to Fargo (who happens to be playing astronaut in the top-secret project, an antiquated space shuttle with a faster-than-light drive) with the intention of extorting information from him. But Zane's power grab launches the two scientists into space. Allison and Carter scramble to figure out how the shuttle launched, and also where the heck Zane and Fargo are!

Allison, believing the shuttle to be unmanned, launches an emergency missile strike to keep the shuttle from colliding with an international space station and killing everyone on it. Carter, having just deduced that Fargo and Zane must be in the shuttle, aborts the missiles, and though Allison's upset that he acted without consulting her, they all move on to the task of getting Fargo and Zane home safely.

Fargo and Zane, meanwhile, see the space station and realize that if they don't do something, both vessels will be annihilated. Fargo manipulates the oxygen supply to act as a jet and maneuver them away from the space station. On the ground, Henry and Allison attempt to set up a cloud exciter - a device that will soften the impact of a vessel traveling faster than light. Fargo uses an electric pulse to send a message that the cloud exciter is missing its ion damper - Zane stole it, rather than making a new one. They receive the message too late, and the whole town is without power. Not only do they have to build a new damper for the exciter, they also have to find a power source for it.

Jo heads to Grace's lab where a generator is lodged a thousand feet underground, where she discovers none other than the lovelorn Andy, whose alloy skeleton makes him a power source. Jo gets Andy back to the exciter where they assemble all the elements just as Fargo and Andy reach the end of their air supply. They fire the FTL drive and land safely back in Eureka. Everyone's ecstatic -Jo even lets Zane give her a little hug.

But nothing can go smoothly in Eureka for long. Just as everyone's enjoying having their feet on the ground, a government official arrives to escort Fargo to Washington. It seems the launch raised some red flags, and Eureka's whole mission is now under the microscope. 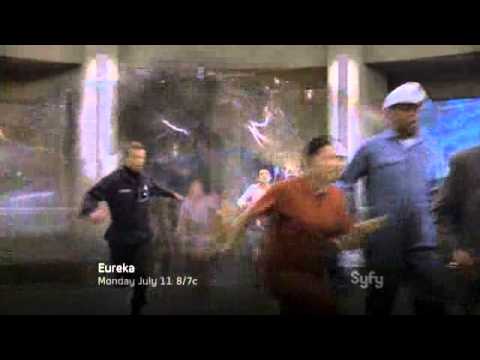