Opening up about his 'ongoing battle with anorexia,' the 'Waiting Outside the Lines' singer shares his story in hopes of making 'a small crack' at a 'taboo' discussion about eating disorders.

AceShowbiz - Greyson Chance has opened up about his battle with anorexia. Through a lengthy post he made on social media, the "Waiting Outside the Lines" singer revealed that his hospitalization was his wake-up call to start making "a small crack" at the "taboo" discussion concerning eating disorders.

On Friday, August 14, the 22-year-old star turned to Instagram to share his story. "I truly don't know where to start. With my last album, I made a promise that I would strive to be as honest as possible through my work," he began the post that featured a black-white photo of a bare chest displaying the "I'm Enough" remarks.

Admitting that he could not release "Bad To Myself" without telling his fans what the song its about, the once YouTube sensation reflected on a particular period in his past. "Back in 2018, when I was writing 'Portraits', I was not in a good place. Not only was I recovering from a tough breakup, but I was also reentering back into music, and I felt nothing but chaos in my head," he spilled.

"I was desperately searching for some kind of control. I found that control by watching the numbers drop on my scale as I starved myself day-in and day-out," he went on dishing. "It wasn't until I woke up in a hospital bed one morning that I knew I had to turn things around not only for myself, but for my family, my friends, and for all of you."

The "Dancing Next to Me" singer then pointed out, "There is a certain taboo around eating disorders in our society, and I am sharing my story to hopefully make a small crack at that stigma." He added, "Eating disorders do not discriminate; they affect such a large population of people, non-dependent on gender, identity, age, or background."

On how he is doing today, Greyson claimed he feels stronger than he had ever been. Though so, he stated, "I would be lying if I said I still am not battling against anorexia, and I know that it will be a continued battle for the rest of my life. To anyone struggling with an eating disorder, know that I am here for you, I understand you, and I encourage you to stay strong in your fight."

Greyson concluded his post with positive messages to himself and his fans. "I love you. You are enough and I am enough. I found an inner-strength through writing this song, and I make a sincere promise to you : I am done being 'Bad To Myself'," he wrote.

The openly-gay singer quickly gained praises for his honest confession. One Instagram user wrote, "so proud of you, thank you for sharing this! We appreciate you so much." Another one raved, "love this!!! love you!!!! so proud of u." A third expressed appreciation by writing, "Thank you so much for this Greyson, I really needed these words today. I'm so proud of you and how far you've come. I can't wait for your new music." 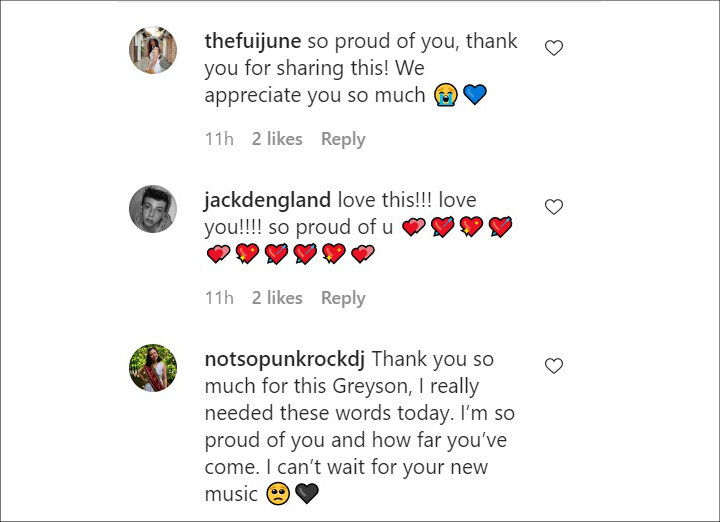 Greyson is set to release his new song, "I'm Done Being Bad To Myself", next Friday, August 21.

Greyson Chance Accuses Ellen DeGeneres of Being 'Manipulative' and 'Self-Centered'