The 'Catch Me Outside' meme girl is fighting the former 'Jessie' actress over rapper NBA YoungBoy and becomes furious when she's blocked on social media.

AceShowbiz - Bhad Bhabie went ballistic on Instagram. The 16-year-old, who became a meme for her "catch me outside" comment on "Dr. Phil", came at 17-year-old Disney star Skai Jackson for allegedly trolling her over rapper NBA YoungBoy.

Bhabie accused the former "Jessie" actress of posting from an alleged spam account about her YoungBoy tattoo and mocking her for being "obsessed" with his "herpes d**k." Bhabie said Jackson was jealous of her, "got mental issues," and wanted to be "a rappers girl friend soooo bad."

On Instagram Live, Bhabie challenged Jackson to a fight. She also ranted on her Story, "Still can't keep my name out her mouth. Smh. This Disney th*t wanna play...okay baby lets play then!" She got even more furious when finding out she's blocked by Jackson, "Unblock me you a**h*e and send ya addy while you at it."

She continued, "I don't care what ANYONE OF ANY RACE got to say about me so y'all telling me 'the black community after me' lol okay wouldn't b the first time [shrug]."

She went on, "Call me a trouble maker or whatever you wanna call me but unlike you scary h*es I'm all about my respect and if I feel disrespected imma make it f**king known."

The "Hi Bich" rapper also said she got Jackson's mother Kiya Cole riled up, "Brooooo this lil girl got her momma coming at me wow she dead a** that scared [laugh]."

Skai Jackson didn't directly respond to Bhabie but she said she was so busy that she had "no time 4 negatives." She listed her schedule from "finalizing makeup deal," "working on speech for Ted Talk," "going over scripts," "recording Netflix animated series," to "vlogging for [her] YouTube channel." 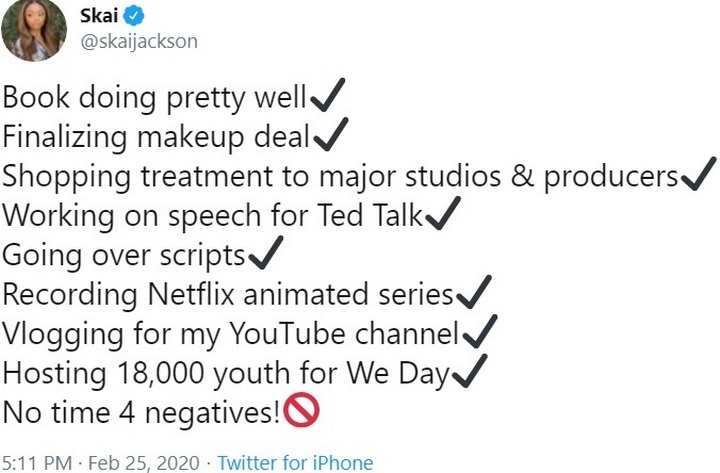 Skai Jackson has no time for negativity

Meanwhile, Jackson's mother posted this cryptic message, "Please don't bring any mess to my page! I'm not here for it! There are bigger things happening in the world!"

Bhad Bhabie on Strained Friendship With Billie Eilish: She's Getting 'Too Big'