In the video shared on his YouTube channel, the former 'Love and Hip Hop: Hollywood' stars are seen checking into the hospital as she prepares to give birth.

AceShowbiz - Ray J and Princess Love will be welcoming the new year as a family of four instead of three. The rapper announced on Monday, December 30 that his wife has given birth to their second child together, a baby boy, along with a video capturing their family's sweet moments.

In the video, which was titled "RAY J EXCLUSIVE FAMILY VIDEO (NEW BABY ALERT)", the former "Love & Hip Hop: Hollywood" stars were celebrating Christmas along with their first child Melody. Ray also included some throwback videos of the time when Melody was just a baby and footage of them taking a private jet and vacationing to exotic locales.

Later in the video, Ray and Princess were seen checking in to the hospital as she prepared to give birth. The 38-year-old, who changed into a pair of scrubs, then filmed the reality TV beauty in a hospital bed and gown as she looked at the camera and waved her hand. The video ended with her being wheeled into the delivery room.

Ray also shared the video on his Twitter account, gushing over his wife in the caption. "I love you [Princess Love] so proud of you," he wrote on the bluebird site. "Strongest women in the world and the mother of my children." 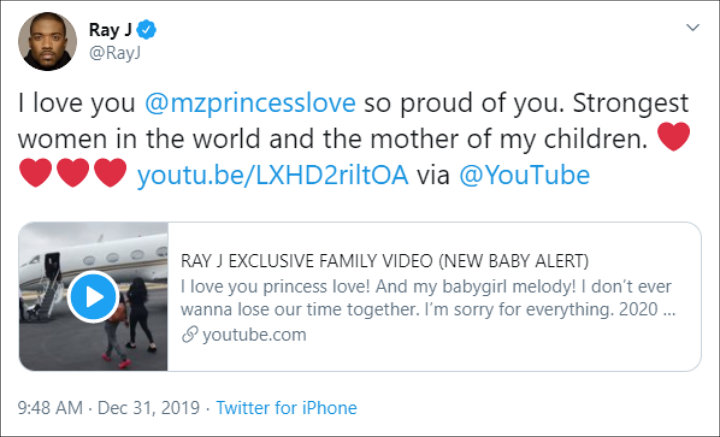 This is surely good news for the couple, who was recently embroiled in marital drama that almost prompted them to get a divorce. However, the couple eventually decided to bury the hatchet and Ray has since apologized to Princess for what he did to her. "I know you still mad at me, but as a couple, you go through things and it just got a little bit out of hand," he previously said. "Sometimes it gets out to the public and then everybody has their opinion on it, but we're good though, as parents and as friends and as husband and wife. We just went through something."

Ray J on Filing for Divorce From Princess Love: It Was an Impulse Decision