Jeffrey Dean Morgan and Wife Hilarie Burton Hint at Baby No. 2 at Emmys

The 'Walking Dead' actor hinted that he and his wife are expecting their second child as he posed with his hand on her stomach on the red carpet of the award show.

AceShowbiz - Is baby No. 2 on the way for Jeffrey Dean Morgan and wife Hilarie Burton? "The Walking Dead" actor hinted that he and his lady love might be expecting their second child when attending the 2017 Primetime Emmy Awards which was held on Sunday, September 17.

Jeffrey opted for a dapper look that night. He wore a velvet tux over a white shirt and a matching vest which he teamed with a matching bow-tie, and accessorized with a blue UCLA ribbon. The 51-year-old actor and his wife were all smiles as they posed for photos, with him at one point placing his hand on her stomach.

Further fueling speculations that she is pregnant, the 35-year-old actress/producer showed an apparent bulging belly in her vintage Lanvin gown which featured billowy detail. The duo were all over each other as they were giggling on the red carpet of the award show that took place at the Microsoft Theatre in downtown L.A. 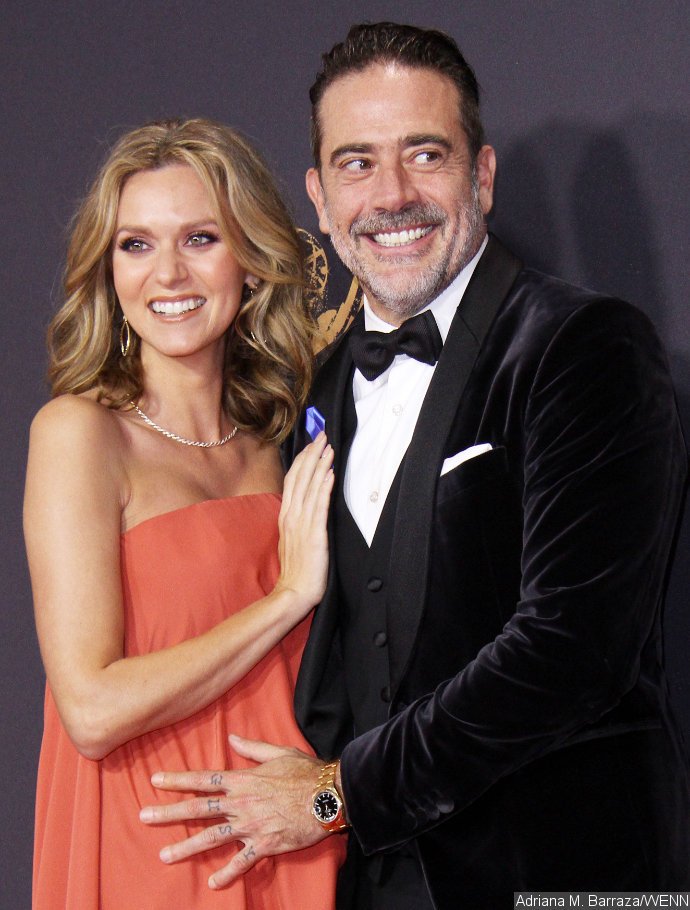 While Jeffrey and Hilarie, who have been together since 2009, didn't confirm the speculations about baby No. 2, they certainly hinted that they might be going to be parents of two soon. The notoriously private couple welcomed their first child, a son named Gus, in March 2010, though they initially kept the birth of their first child secret.

After one of the photos featuring Jeffrey rubbing his wife's stomach surfaced, people on the internet could not help but speculate that Hilarie's indeed pregnant. "OK @HilarieBurton @JDMorgan CAN WE GET AN OFFICIAL CONFIRMATION?! YOU'RE BOTH GLOWING," one Twitter user gushed, adding heart emojis.

Another user tweeted, "Did @HilarieBurton and @JDMorgan just tell us they're pregnant with this bomb a** picture?!"

Did @HilarieBurton and @JDMorgan just tell us they're pregnant with this bomb ass picture?! 😳✨😩💣🔥❤️ pic.twitter.com/cLDv2WAWzY

Along with a collage of Emmys' red carpet photos, one other said, "Hilarie Burton might be PREGGERS."

After Hilarie tweeted a photo of her husband with Dave Chappelle, who was presenting that night, another Twitter user replied with the red carpet photo indicating her pregnancy and urged, "okay but like what I'm wanting is a confirmation of what this picture is hinting okay thanks."

okay but like what I'm wanting is a confirmation of what this picture is hinting okay thanks pic.twitter.com/fXJsNuiboi

Another similarly asked the couple, "@JDMorgan @HilarieBurton have something to tell us??" before praising, "you two look wonderful tonight."

@JDMorgan @HilarieBurton have something to tell us?? you two look wonderful tonight😘😘 pic.twitter.com/cEWIaoHsE1