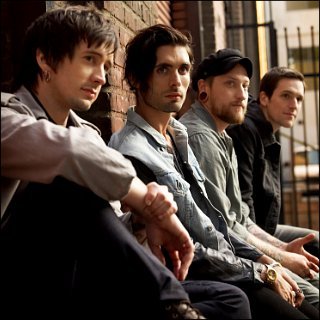 A pop punk band of Stillwater, Oklahoma based, %cThe All-American Rejects% were originally formed by %cTyson Ritter% and %cNick Wheeler% who discovered that both of them shared profound interest in music when they got to know each other during their high school years. Looking for additional players in their newly established project, these two gifted young guys eventually picked %cMike Kennerty% to be the group's guitarist and %cChris Gaylor% to replace drummer %cTim Campbell%, making the band's formation fixed as a quartet. Immediately working together to compose their own songs with Tyson as the vocalist/bassist and Nick in guitar/keyboard/programming task, they spent the rest of 1990s holding some live performances around the town while also recording a few demos that showcased their brand of scrappy, stylish guitar-pop with the goal to self-release their initial effort.

Accomplishing their objective to launch an indie album by the spring of 2000, The Rejects gradually built a large local fanbase that later led them to be the opening act for %cThe Flaming Lips% and %cCaroline's Spine%. Next releasing an EP entitled "Same Girl, New Songs" in 2001 followed by a tour around Midwestern America, the band satisfyingly took a step further when they were able to gain the attention from Doghouse Records which they thus signed with to work on their international debut album. A self-titled one, this composition surprisingly scored a great result when it came up on October 1, 2002, breaking into the top 40 of the Billboard 200 beside securing the 8th rank on the Top Heatseekers chart. However, it was through one of its tracks entitled "Swing, Swing" that the quartet finally hit the mainstream as the single managed to enter four Billboard charts in 2003, unquestionably bringing them to widespread popularity all over the globe.

The tremendous success they had achieved apparently attracted DreamWorks Records and within a short time the personnel found themselves signed to the company which then re-released "The All-American Rejects" in 2003 with a bonus track of the acoustic version of "The Cigarette Song" in its British edition. After taking a two-years hiatus to hold numerous shows across the country, the band marked their comeback in 2005 through their sophomore effort, "Move Along", on July 12 under Interscope Records. Containing 12 impressive songs, including "Dirty Little Secret", the album instantly sold for thousands of copies to finally be certified gold by RIAA, proving that the band is really not a one-hit wonder as many people had considered.

The band soon found themselves as a center of bigger media attention after the release of the title track "Move Along" in January 2006, thanks to its music video which led the song to become a massive hit. The video topped MTV's TRL for four days in a row. It was also nominated in 2006 MTV Video Awards for "Best Editing in a Video" before finally seizing a prize for "Best Group Video". While touring all-year-long in 2006, the band managed to compile a short EP titled "Bite Back" and to compose a soundtrack for Disney's "Meet the Robinsons".

After that, the band slowed down on touring and decided to focus on crafting new music for their next studio album. They even canceled shows with %cSimple Plan% as well as their planned "Warped Tour" in order to finish their new album. Titled "When the World Comes Down", the record began to be recorded in summer 2007. It took its title from a lyric in the second single "Mona Lisa". Instead of hitting the U.S. market on November 18 2008 as it was originally planned, the effort is due for U.S. release on December 16 2008.

This pop punk band picked up "Gives You Hell" as the lead single off their third album and dropped it in September 2008. It charted at number 22 on Hot Digital Songs and climbed to number 46 on Billboard Hot 100 Singles chart. The next month, they released the second song off the record, "Mona Lisa", which narrated about "struggles, and how, with the right companion, you can take any punch the world throws at you." Produced by Eric Valentine, the song was first played at last year's Lancaster Valley Fair. Beside "Gives You Hell" and "Mona Lisa", other singles to appear in the soon-to-be-released effort are "The Real World", which was confirmed to be on the soundtrack for video game, "Madden NFL 09", and "Another Heart Calls", where they collaborated with %cThe Pierces%.

For a promotional tour to support "When the World Comes Down", the band plotted to hit the road starting in spring 2009. A bunch of dates in Europe, Australia, and Japan have been in the works.