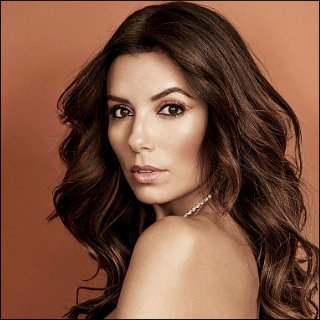 Early in her life, "the ugly duckling" Eva Jacqueline Longoria probably had never imagined that she would transform into a beautiful swan, becoming one of the hottest promising actresses in the United States. Being the youngest in Longoria family, she is different from her three other sisters for her dark complexion as well as her darker eyes and hair. Nevertheless, she passed her childhood happily, grew up on her parents' ranch in Corpus Christi, Texas, which also was her place of birth. Born on March 15, 1975 she made her way to successfully earn a Bachelor of Science degree in Kinesiology at Texas A&M University in Kingsville.

Her life slightly changed when she became Miss Corpus Christi USA in 1998, which endorsed her determination to pursue a career in acting. When Eva came to L.A., she was noticed and signed by a theatrical agent who got her an audition in a comedic play titled "What the Rabbi Saw" in which she was accepted. Afterwards, she played small roles in some television series, namely "The Bold and the Beautiful"; "General Hospital"; and "Beverly Hills 90210." This beautiful actress made a great leap in her career by joining the cast of "The Young and the Restless" in 2001. Her acting as Isabella Brana Williams in the film led her to win an ALMA award for Outstanding Actress in a Daytime Drama.

She left "The Young and the Restless" in 2003 and appeared in the films "Snitch'd" (2003), "Dragnet" (2003), and TV series "Senorita Justice" (2004). In addition to those, Eva also co-starred and co-produced "Hot Tamales Live: Spicy, Hot, and Hilarious," a comedy/variety show which has become a hit and been critically acclaimed. However, it was ABC's TV series "Desperate Housewives" that brought her to reach a tremendous success when it was launched in October 2004. Starred as adulteress Gabrielle Solis in the mega hit, watched by over 27 million viewers each week, directly made her name being well known nationwide. Aside from "Desperate Housewives," Eva kept developing her acting career. She took role in a small screen, "The Dead Will Tell" (2004) together with Anne Heche, then starred in the action-thriller movie "Carlita's Secret" (2004). Her next projects were the movies "Harsh Times," being in the same scene with Christian Bale, and "The Sentinel," along with Michael Douglas, Kim Basinger, and Kiefer Sutherland. Both films hit the theaters in 2006.

As for her private life, Eva first married to "General Hospital" actor Tyler Christopher on January 20, 2002 but then decided to go separate ways and had their divorce papers finalized on January 19, 2004. Ever since, she dated JC Chasez before at last embarked on a romance with San Antonio Spurs basketball player, Tony Parker who happens to be 7 years her junior. Notwithstanding with the many negative rumors surrounding their relationship and the ups and downs they had to face, the couple managed to make it and got engaged in November 2006. After months of preparation they made their way to the altar, made it official in a low-key civil ceremony in Paris on July 6, 2007 followed thereafter by an extravagant party held the next day at Paris' Eglise Saint-Germain l'Auxerrois, a church opposite the Louvre Museum which is usually used to serve French royals. Among the celebrity guests were singer Sheryl Crow, "Desperate Housewives" stars Teri Hatcher, Felicity Huffman and hubby William H. Macy, Marcia Cross, and Nicollette Sheridan.

In early December the same year, Eva and Tony were hit with an infidelity claim brought to public's notice by French model Alexandra Paressant who insisted to have had a brief fling with the basketball player in between his marriage to the tiny actress. Got bombarded with accusation after accusation, the couple nevertheless denied the cheating allegation, claimed it as "100 per cent false and untrue." Unaffected by the claim, Eva underwent such a smooth acting career, landed her feet in more film projects, among them were action, animation, comedy flick "Foodfight!" (2007) and the comedy romance "Deep in the Heart of Texas" (2008). In addition to those, she also has been booked to star in "Over Her Dead Body" (2008), a comedy flick which will see her playing alongside Paul Rudd, Lake Bell, Jason Biggs, Stephen Root, and Lindsay Sloane just to name a few.